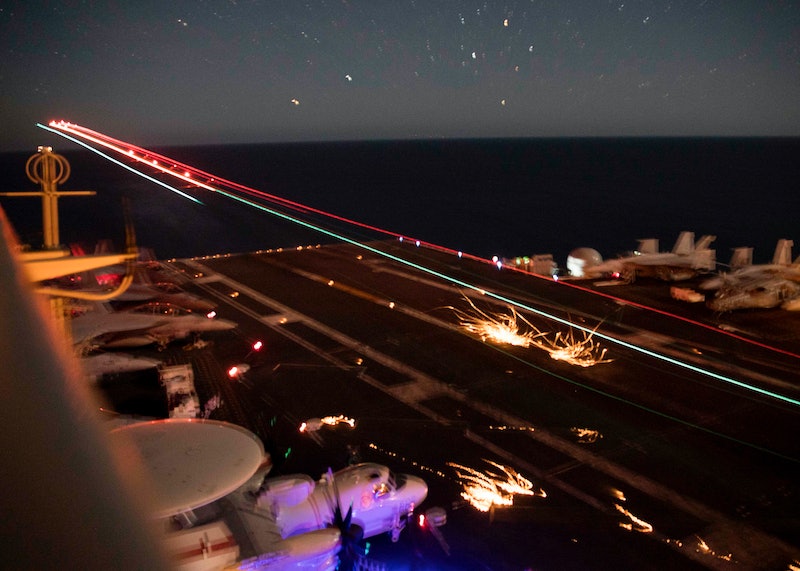 When you see something in the sky without immediately knowing what it is, chances are that it's still not a true extraterrestrial UFO. Recently, though, some people who know a thing or two about flying objects have seen some fairly strange stuff, and it's prompting a rethinking of the whole UFO concept. Navy pilots' UFO sightings on the East Coast have forced the Navy to issue new guidelines on how to address the sightings — but according to The New York Times, they still don't want you to think that aliens are behind the sightings.

“We have helicopters that can hover,” Lt. Ryan Graves told The New York Times while talking about one of the sightings. “We have aircraft that can fly at 30,000 feet and right at the surface.”

What he had seen, though, was an object that could “combine all that in one vehicle of some type with no jet engine, no exhaust plume" — and he didn't know of any Navy contraption that could do that.

Back in April, The Washington Post reported that the Navy had initially been ignoring these UFO reports, which angered the pilots who made them. In the end, though, the pilots' complaints prompted the Navy to “investigate each and every report," as Navy spokesperson Joseph Gradisher told The Post.

"As part of this effort, the Navy is updating and formalizing the process by which reports of any such suspected incursions can be made to the cognizant authorities," the Navy told Politico in regards to the new reporting guidelines. "A new message to the fleet that will detail the steps for reporting is in draft."

As Politico wrote, the Navy's decision to update reporting guidelines doesn't mean that it's ready to turn the corner and assume that its pilots have actually witnessed extraterrestrial spacecraft flying around Navy planes. Instead, the new guidelines will just mean that the pilots' reports of what the Navy calls "unexplained aerial phenomena" will be investigated and taken seriously.

Experts in the space field agree that the Navy is right not to jump to the extraterrestrial explanation, which senior astrophysicist Leon Golub of the Harvard-Smithsonian Center for Astrophysics called "so unlikely that it competes with many other low-probability but more mundane explanations," according to The New York Times.

Still, even with the Navy's refusal to endorse the alien option doesn't mean that there's no one who believes it. Luis Elizondo resigned from a high-ranking post at the Pentagon after the military canceled the program he was leading, which investigated sightings of objects like these, according to CNN. He then told CNN that he didn't have an earthly explanation for what the pilots had seen, and he believed the decision to stop investigating them posed a potential national security threat.

"These aircraft -- we'll call them aircraft -- are displaying characteristics that are not currently within the US inventory nor in any foreign inventory that we are aware of," Elizondo told CNN.

For now, it's probably more sensible to go with the Navy's thinking on the matter — namely, that instrument malfunctions or something similarly normal were responsible for the so-called UFO sightings. But at the same time, you don't have to rule out the more mysterious reading of the situation.