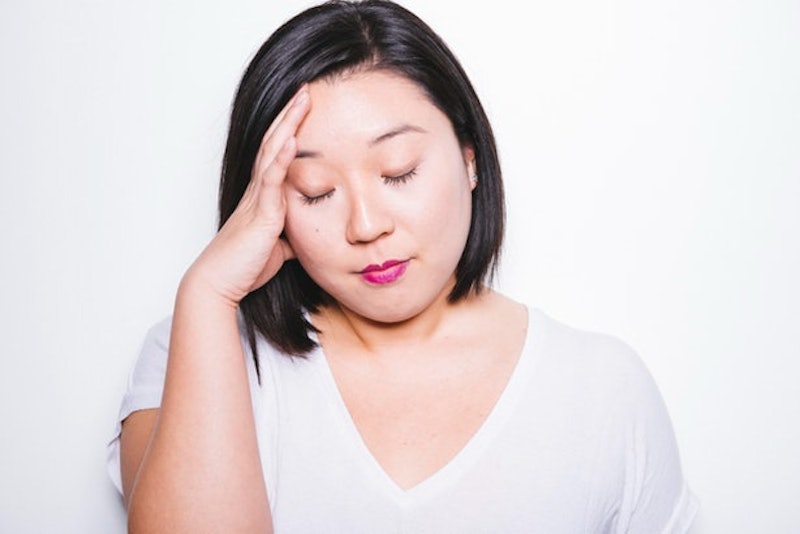 Visiting the gynecologist for the first time can be nerve-wracking — but the apprehension many young women feel might be worse than we previously thought. In fact, a new survey by Orlando Health, the non-profit healthcare network, found that a shocking amount of women were concerned before their first trip to the OB/GYN.

Forty percent — or two out of every five — young women had some sort of concern before visiting the OB/GYN for the first time. What should feel like a healthy decision to take your health into your own hands, can actually feel uncomfortable and shrouded in secrecy. "There can be many different reasons why a young woman might be concerned about visiting the OB/GYN," Christine Greves, MD, an OB/GYN at Orlando Health, tells Bustle. Part of the issue can stem just from the physical aspect of the appointment — some women worry it will hurt. But Greves notes that she also might have had friends with bad experiences or just be embarrassed at the idea of the appointment.

"It’s important that young women have an open relationship with their doctor so they feel like they can share anything and everything and not be judged," Greves says. "I tell my patients that we are here to help and there is no judgment."

But many women feel like they're walking into the dark without an ally. “I had a lot of questions, but I guess I was too embarrassed to ask them, and by the time I was in the exam room it seemed too late for that,” Savanna Harris, a 19-year-old who was surveyed, explained. “I was afraid it was going to be painful or that they were going to find something wrong with me. I also had no idea that I could have someone in the room with me, and I think having a friend or family member’s support would have made me feel a lot better.”

But in some cases, the consequences from feeling too uncomfortable to make an appointment or speak up during it can be huge. Women won't get the testing or treatment they need because they're scared of the process itself. So, what can help them feel more at ease? "Ask friends or family members what doctor they see to help you find out if their doctors would be a good fit," Greaves says. "I encourage having regular annual visits, not only because that is what is recommended to perform pelvic exams and breast exams, but also so women have an ongoing relationship with their doctor that is established without tense moments. That way when issues do arise, there is absolutely no shame and they feel very comfortable talking about whatever is concerning them."

So what were the concerns about? Here's what the survey found.