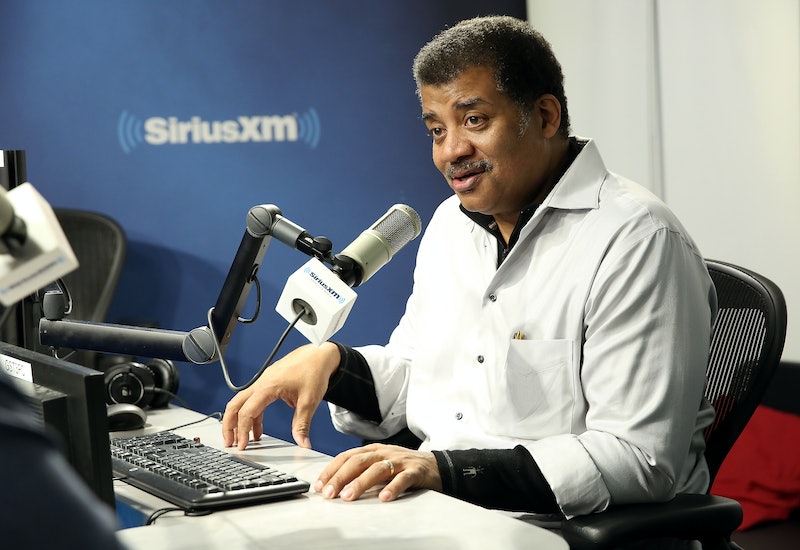 Save the planet? Maybe not. Astrophysicist Neil deGrasse Tyson's Earth Day post told us why "Save Earth" is kind of a pointless rallying call. On Earth Day Sunday, the famous scientist went on Twitter to correct the popular phrase, writing:

The perennial cry to “Save Earth" is odd. Planet Earth survives massive asteroid strikes -- it'll survive anything we throw at it. But Life on Earth will not.

Tyson has got a point. Planet Earth is still going strong after 4.5 billion years, adapting to natural disasters that have wiped out entire species and animals groups (RIP, dinosaurs) before any semblance of Homo sapiens even existed. Earth is pretty resilient and adjustable, despite major threats over its lifetime. While scientists have predicted various ways any and all life on Earth will eventually end, Tyson suggests that it's the current life on Earth that needs saving.

Scientists generally agree that Earth has gone through five mass extinctions already, and it's currently going through its sixth one. The difference between this one and the previous five is that humans are causing the latest extinction. As planetary scientist Carolyn Porco chimed in on Twitter: "'Save Earth' is shorthand for save the (livability of the) oceans and surface environment, and all of life on the planet."

Science communications expert Aaron Huertas also weighed in on the catchy environmental slogans. "Admittedly, 'Preserve the Relatively Stable Biosphere in Which Human Civilization Developed' doesn't quite have the same ring to it," he tweeted.

Right now, Earth could survive for at least 5 billion more years when the sun's torch finally snuffs out — short of a major catastrophic event before that, like a volcanic apocalypse or another asteroid clobbering. Humans could potentially last another 1 billion years before the sun becomes too hot for life on Earth to be habitable, reported Science X. But to make it that far, people would have to mitigate the risk factors that are accelerating the destruction of human civilization. Those risk factors include habitat destruction, unchecked population growth, and economic activities that contribute to global warming. A study reported by National Geographic suggests that species extinction is happening 1,000 times faster with humans than it would be if humans didn't exist.

According to the 2014 report "Human and Nature Dynamics," which analyzed the collapse or sustainability of societies:

The two key solutions are to reduce economic inequality so as to ensure fairer distribution of resources, and to dramatically reduce resource consumption by relying on less intensive renewable resources and reducing population growth.

And as many environmentalists would argue, corporate changes make a bigger impact than individual changes. That doesn't mean people shouldn't eat less meat, invest in renewable energy sources, or use less plastic. Those personal choices add up collectively. But not everyone has the means to install solar panels on their house or bike to work. As environmental writer Martin Lukas wrote for the Guardian, "individual choices will most count when the economic system can provide viable, environmental options for everyone — not just an affluent or intrepid few."

How much responsibility should corporations be accountable for then? Well, according to the 2017 Carbon Majors Report, just 100 companies have been the source of more than 70 percent of the world's greenhouse gas emissions since 1988. U.S. companies near the top of the list included ExxonMobil and Chevron. In other words, what big companies do matters a lot.

So while yes, you should say no to plastic straws, you should also use your voting power to elect people to office who prioritize climate change policies. Or support retail companies who are making zero-waste targets. Because Earth will survive, but if we want life on Earth as it currently exists to also thrive, it's going to take a collective and global effort.