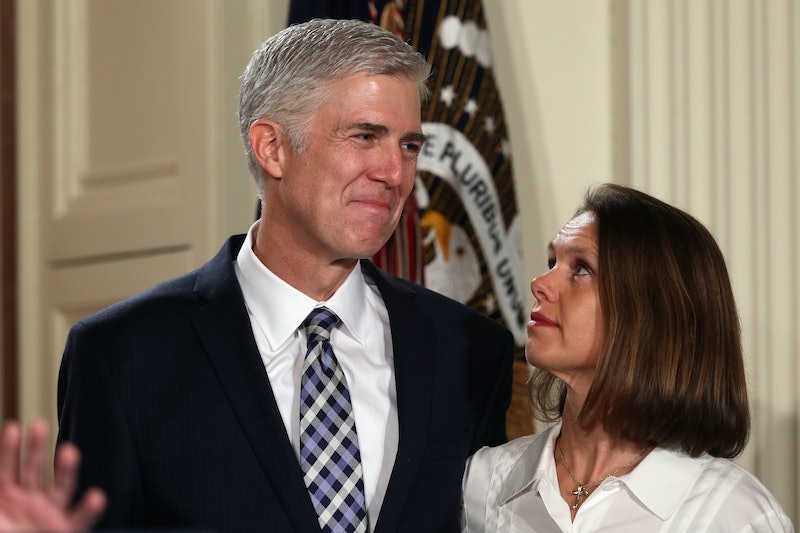 If all goes according to President Trump's plan, Neil Gorsuch will soon take the empty seat on the Supreme Court's high bench. After weeks of speculation, Trump formally nominated Gorsuch, currently a Tenth Circuit appellate court judge in Colorado, to the Supreme Court on Tuesday. Based on Gorsuch's opinion in the SCOTUS Hobby Lobby case, the new justice is likely to judge with a conservative streak.

The court heard Burwell v. Hobby Lobby Stores, Inc. in 2014, ruling that corporations can refuse to provide contraception coverage for their employees on the grounds of religious freedom. In the suit, Hobby Lobby argued that it shouldn't have to cover contraception for its employees because of its Christian ownership. The court's majority sided with Hobby Lobby — dealing a blow to President Obama's universal healthcare mission — but the bench as a whole ultimately remained deeply divided. It was a 5-4 vote.

At the time of the Hobby Lobby case, Gorsuch sat, as he did on Tuesday, on the bench for the U.S. Court of Appeals for the Tenth Circuit. His appellate court heard the case before it went on to the Supreme Court. Although he made his judgment before the Supreme Court's involvement, Gorsuch sided with SCOTUS's majority.

In that case, Gorsuch's opinion noted the importance of protecting religious freedom. He also noted how unpopular his position might be.

On the night of Gorsuch's nomination, it was clear that his opinion was still unpopular among many reproductive rights advocates. Such advocates challenged Gorsuch to uphold Roe v. Wade and protect women's own freedom to manage their reproductive health. "Any prospective Supreme Court nominee must hold views consistent with the Constitution and settled law about a woman’s ability to make her own reproductive health decisions," said a statement from Jodi Magee, president and CEO of Physicians for Reproductive Health.

Gorsuch's nomination may send a troubling sign to reproductive rights advocates, but it was not unexpected. When Trump announced his SCOTUS pick on Tuesday night, he referenced the short list circulated during his campaign. Gorsuch, known for his Antonin Scalia-like approach to the law, seemed like a good bet leading up to Tuesday's announcement. Now, it's to be determined if he's a good bet for the country's women.