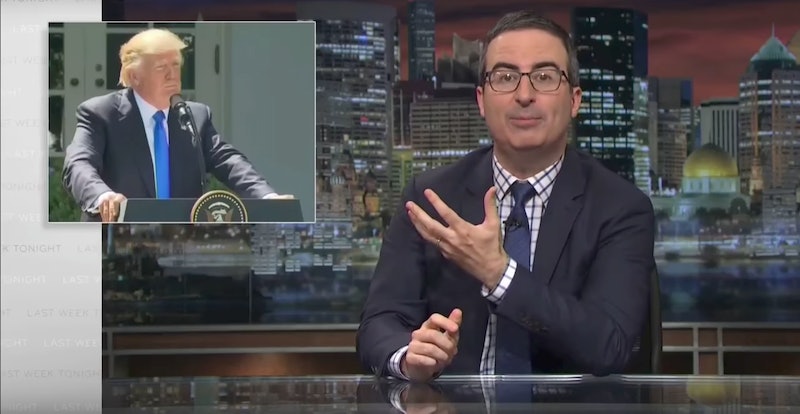 "Stupid Watergate" rolls on not only in real life, but also on Last Week Tonight. On Sunday's episode, John Oliver dived into the scandal that's "something with all the potential of national shame of Watergate, brought to you by people too stupid to grasp the concept of shame." It's funny because it's true, right? Oliver dived into the week that saw James Comey testify in front of the Senate Intelligence and Trump react a day later on Twitter. That's what Oliver ripped into Trump for the most — his Comey reaction.

Trump, of course, somehow stayed silent the entire day of the testimony. It was only the following morning when he took to Twitter to engage on the matter. "Despite so many false statements and lies, total and complete vindication...and WOW, Comey is a leaker!" Trump wrote before dissing the media in general and praising Fox & Friends. Oliver wasn't buying it:

Just think about what he's saying there. Trump is essentially claiming that he's been vindicated by testimony he's claiming is false. At this point he's become a walking logical paradox. I honestly wouldn't be surprised if he starts tweeting things like, "I just traveled back in time and killed myself. VERY UNFAIR."

But that wasn't Trump's only response. At a press conference, Trump repeated that Comey had lied. He also said he'd be happy to speak with the Special Prosecutor Robert Mueller under oath to explain his version of events.

Oliver was shocked. "Holy sh*t! Trump just volunteered to testify under oath, putting himself in a situation where it's his word against Comey's," Oliver said. "It was notable for all the pushback senators gave Comey, they never once questioned his honesty and his integrity — or challenge his characterization of Trump as a liar."

That begs the question, Oliver argued, "Why did Trump just seem to expose himself like that?" It seems there is no sensible answer. Oliver continued:

Those were not Oliver's only jokes on the Comey matter. Oliver showed a clip earlier in the segment from when Comey told the committee why he was concerned about meeting with Trump — and why he took notes on the meetings. "I was honestly concerned that he might lie about the nature of our meeting, and so I thought it really important to document," Comey told the select committee.

Oliver then joked, "He's describing his meeting with the president like a person who thought he was about to be murdered. 'All of a sudden we're alone so I texted my location to a friend and tried to get some of his DNA under my fingernails.'"

Maybe Trump will watch his reactions in the future to avoid Oliver's wrath. Still. Don't count on it.