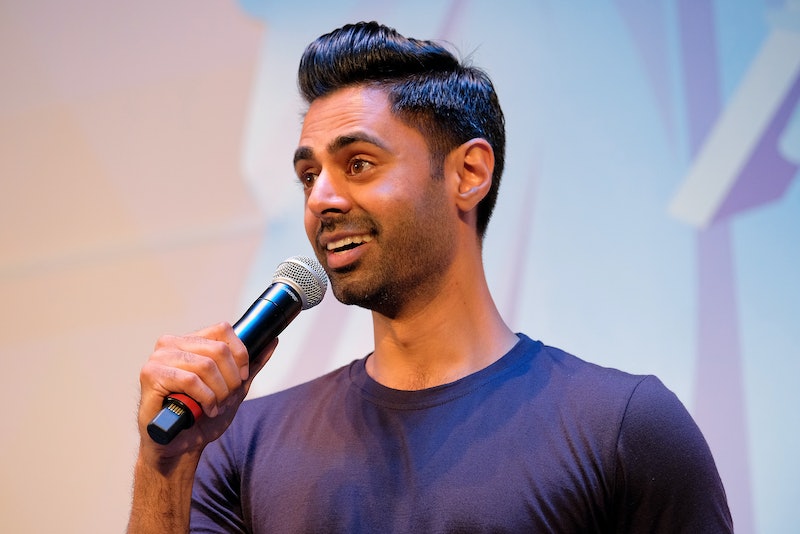 After reportedly receiving a complaint from the Saudi Arabian government, Netflix has pulled an episode of Hasan Minhaj’s Patriot Act, according to NBC News. The episode, which was removed from the streaming service only in Saudi Arabia, was highly critical of the way the Saudi crown handled the murder of Washington Post journalist Jamal Khashoggi. A Netflix spokesperson released a statement to Bustle, saying, "We strongly support artistic freedom worldwide and removed this episode only in Saudi Arabia after we had received a valid legal demand from the government — and to comply with local law." Bustle also reached out to Hasan Minhaj, but had not heard back at time of publication.

As the Financial Times first reported, Netflix reportedly took down the episode in Saudi Arabia because “a Saudi regulator cited a law that prohibits the 'production, preparation, transmission, or storage of material impinging on public order, religious values, public morals, and privacy, through the information network or computers.'" However, it is important to note that Netflix removed the episode from its Saudi Arabian site, but it remains up on the Patriot Act YouTube page and available to view in Saudi Arabia.

Minhaj responded to Netflix's decision on Twitter Wednesday, Jan. 2, writing, "Clearly, the best way to stop people from watching something is to ban it, make it trend online, and then leave it up on YouTube." In addition to this comment, he also directed fans towards an International Rescue Committee fundraising page aimed to send humanitarian aid to Yemen. "Let's not forget that the world's largest humanitarian crisis is happening in Yemen right now. Please donate," he added.

In the episode, Minhaj condemned the Saudi Arabian crown prince Mohammed bin Salman (also known as MBS) for what he called the "cover up" of Khashoggi's murder. In the 20-minute episode, he also discussed the country's role in the war in Yemen, and examined its political ties with the U.S, specifically the country's financial ties with Silicon Valley. "The Saudis effectively own 10 percent of Uber, which makes complete sense," Minhaj joked. "Saudi Arabia and Uber are both places women drivers don't feel safe."

The streaming service's decision to remove the episode to comply with the Saudi Ariabian crown has sparked widespread criticism, including from Human Rights Watch. "Every artist whose work appears on Netflix should be outraged that the company has agreed to censor a comedy show because the thin-skinned royals in Saudi complained about it,” a spokesperson from Human Rights Watch said, via The Guardian, adding, “Netflix’s claim to support artistic freedom means nothing if it bows to demands of government officials who believe in no freedom for their citizens."

There was both outrage at Netflix's decision and support for Minhaj on Twitter, including some from Khashoggi's fellow journalists. Washington Post Global Opinions editor Karen Attiah tweeted in support of the comedian, commending the episode while also admonishing Netflix's decision. "Quite outrageous that @netflix has pulled one of his episodes critical of Saudi Arabia," she wrote in part.

Minhaj previously stated that he was aware that making his Saudi Arabia episode came with certain risks. In fact, the comedian told the Atlantic that there was talk in his family that he shouldn't do the episode at all, for fear of his own life. Minhaj was well aware of the consequences of speaking out against the crown prince of Saudi Arabia. "I’ve just come to personal and spiritual terms with what the repercussions are," he said. The comedian also revealed that he had been targeted by Saudi Arabia bots on Instagram.

So far neither the official Patriot Act Twitter or Instagram have made any comment about the episode being taken off of Netflix in Saudi Arabia. But knowing Minhaj, this is exactly the kind of thing that would make for a perfect future episode.