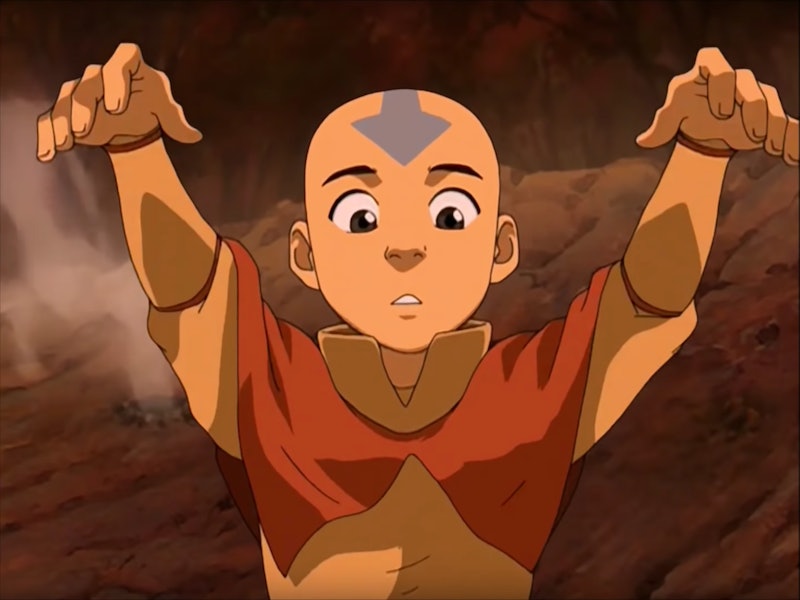 It's been roughly eight years since Avatar: The Last Airbender saw its first live-action remake. And now, as of Tuesday, Sept. 18, it's due for another. But this time around, Netflix's Avatar: The Last Airbender live-action series promises a more loyal adaptation of the original Nickelodeon classic, especially when it comes to authentic representation. (Something its 2010 adaptation sorely lacked, as dozens of critics and fans noted at the time.)

So, what's the deal with Netflix's new take on the franchise? On Tuesday morning, the platform announced its plans to adapt Avatar: The Last Airbender for contemporary audiences' streaming pleasure. In a tweet that has since garnered almost 24,000 likes from excited social media users far and wide, Netflix described the upcoming adaptation as "a reimagined, live-action Avatar: The Last Airbender series." And, providing the internet with a glimpse of what this newfangled live-action reimagining is all about, Netflix's announcement tweet also included a first look at what the series is going to look like, courtesy of some gorgeous "concept art" by artist John Staub.

(Seriously, those with an appreciation for elegant graphics need to check this out.)

The pastel-toned image draws pretty obvious aesthetic inspiration from the animated Nickelodeon series of the mid-2000s and features at least one Last Airbender veteran that fans of the original will recognize. For those who need to brush up on their Last Airbender trivia, Netflix's new concept image sees a modernized rendering of Appa, the flying bison who served as Aang's part-time pet, part-time expedition partner in the original Avatar series. Unsurprisingly, it looks like Aang, the young airbender who has historically held the series' title role, is standing there, too.

Per TVLine, a recent statement from the original series' creators Bryan Konietzko and Michael Dante DiMartino (who will reportedly serve as show runners on Netflix's live-action adaptation) suggests The Last Airbender will bring fans a resurgence of the characters many came to know and love during their formative years. Which means Aang and Appa — and hopefully some others, too — will be making their much-anticipated return to the small screen.

"We're thrilled for the opportunity to helm this live-action adaptation of Avatar: The Last Airbender," Konietzko and DiMartino said, opening their Tuesday statement. And while Netflix's remake will pull from the franchise's former iterations in some foundational ways (like the inclusion of its original characters and general premise), their statement made clear that the upcoming live-action series will depart from past adaptations of The Last Airbender in some really important ways. To that end, it read,

"We can't wait to realize Aang's world as cinematically as we always imagined it to be, and with a culturally appropriate, non-whitewashed cast."

Audiences who watched M. Night Shyamalan's 2010 live-action adaptation, The Last Airbender, probably understand what Konietzko and DiMartino's statement was getting at. At the time, fans and critics alike were disappointed by the adaptation's casting, which saw mostly white actors playing characters of east Asian and indigenous descent. In light of that, the showrunner's Tuesday statement promises a fresh, and hopefully less offensive, reboot of the original Nickelodeon show.

"It's a once-in-a-lifetime chance to build upon everyone's great work on the original animated series and go even deeper into the characters, story, action, and world-building," the statement read, adding that "Netflix is wholly dedicated to manifesting our vision for this retelling, and we're incredibly grateful to be partnering with them."

As long as Netflix's vision for The Last Airbender is one that pays respect to the real-life people and cultures from which it draws its fictional narrative — and, based on Tuesday's statement, it does sound like it will be — then here's hoping its upcoming remake is every bit as magical as the original.

More like this
Olivia Colman Is Supporting Her On-Screen Son Kit Connor In The Sweetest Way
By Catharina Cheung and Darshita Goyal
'Bridgerton' S3 Teases Exciting Social Season For Penelope Featherington
By Bustle
The First Trailer For 'That '90s Show' Includes So Many Nods To The Original Series
By Jack Irvin, Alyssa Lapid and Grace Wehniainen
Here’s Everything Coming To & Leaving Netflix In December
By Jake Viswanath
Get Even More From Bustle — Sign Up For The Newsletter