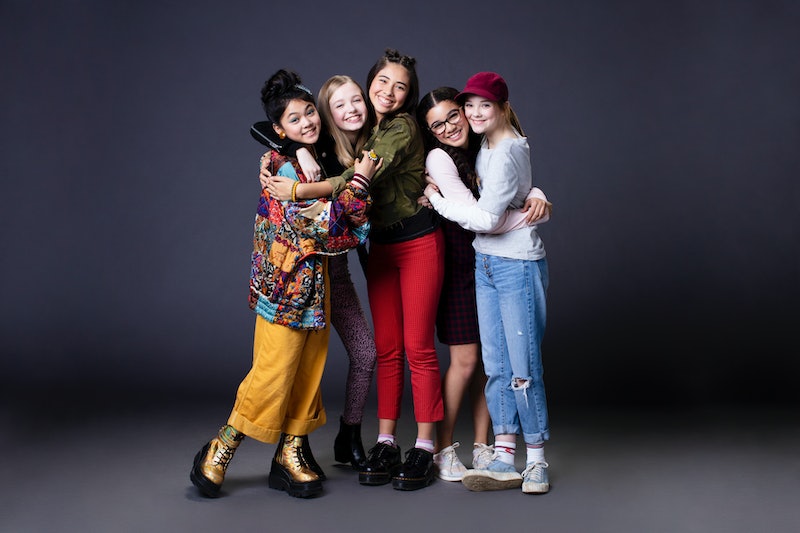 Claudia, Stacey, Dawn, Mary Anne, and Kristy have reunited and it feels so good. Netflix released photos from the new The Baby-Sitters Club series, the upcoming adaptation of Ann M. Martin's beloved books. Not only do the images exude girl power, but they will definitely bring back memories for longtime fans of the book series and characters. Prepare to go back to the '90s.

The Baby-Sitters Club's first season will be comprised of 10 episodes, 30 minutes each, and feature updated stories about the girls we all love. Unfortunately, the show doesn't have a release date yet, but it does have an all-star cast. The series will star Sophie Grace as Kristy Thomas, Malia Baker as Mary-Anne Spier, Momona Tamada as Claudia Kishi, Shay Rudolph as Stacey McGill, and Xochitl Gomez as Dawn Schafer. Clueless' Alicia Silverstone and Royal Pains' Mark Feuerstein will also join the cast as Elizabeth Thomas-Brewer and Watson Brewer, respectively.

Like the books, the 1990 TV series, and the 1995 movie, Netflix's version will follow the middle-schoolers as they start their very own babysitting business in the town of Stoneybrook, Connecticut. But, while the concept might be pure '90s nostalgia, the show won't exactly be a trip down memory lane. This version of The Baby-Sitters Club will be more of a contemporary dramedy, with Glow's Rachel Shukert serving as showrunner and Broad City's Lucia Aniello as executive producer and director. Michael De Luca developed the series and Walden Media's Frank Smith and Naia Cucukov also serve as executive producers. Of course, the series will also celebrate friendship, female empowerment, and entrepreneurship, just with an updated, more current twist.

OG Baby-Sitters Club fans probably noticed that both Mallory Pike and Jessi Ramsey are nowhere to be found in this new adaptation. It's unclear if the characters have been cast or if they'll be part of the show at all. Kristy, Stacey, Claudia, Mary Anne, and Dawn were the five main characters of The Baby-Sitters Club, so perhaps the show is simply waiting to introduce more girls later on.

The new Baby-Sitters Club already looks like a hit, so fans shouldn't lose hope just yet about Mallory and Jessi. Season 2 could be just around the corner.

More like this
A New 'And Just Like That' Table Read Pic Confirms A Key Character's Return
By Jack Irvin and Grace Wehniainen
At 28, Debra Jo Rupp Was Living A Much Different '70s Show
By Grace Wehniainen
'That '90s Show' Star Callie Haverda Got Advice From Mila Kunis & Ashton Kutcher
By Brad Witter
Here’s Why Danny Masterson’s Hyde Isn’t In 'That '90s Show'
By Brad Witter
Get Even More From Bustle — Sign Up For The Newsletter
From hair trends to relationship advice, our daily newsletter has everything you need to sound like a person who’s on TikTok, even if you aren’t.