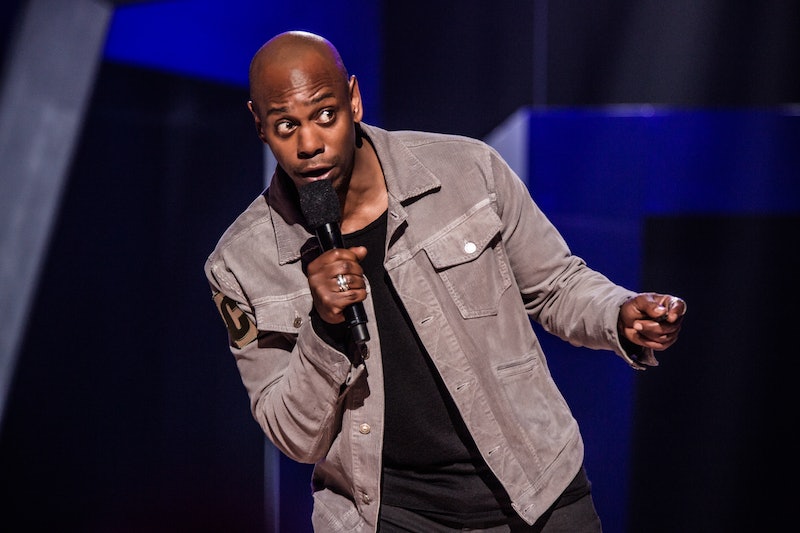 The king of all streaming services is actually encouraging subscribers to turn off their screens for once. Netflix is hosting a comedy festival, meaning that viewers need to actually venture into the real world and head to Los Angeles to watch some of the streaming service's comedy giants in action. The inaugural Netflix Is A Joke Fest features a major line-up of legendary and emerging comedians alike, including Dave Chappelle, Amy Schumer, Hannah Gadsby, and so many more.

Netflix Is A Joke Fest will consist of live stand-up shows headlined by some of Netflix's top comedic talents (aka comedians with Netflix Stand Up specials). Comedians Ali Wong, Bill Burr, David Letterman, Jamie Foxx, Jane Fonda and Lily Tomlin, Martin Lawrence, Sebastian Maniscalco, and the cast of Schitt's Creek are also topping the line-up. Some of the special events include Chappelle hosting a night of music and comedy at the Hollywood Bowl, and Stand Out: An LGBTQ+ Celebration featuring Gadsby, Alan Carr, Margaret Cho, Rosie O'Donnell, Sandra Bernhard, and Wanda Sykes, as well as presenters Demi Lovato, Graham Norton, Ruby Rose, and Tomlin.

The festival will come to a close with The Hall, a hall of fame event paying tribute to greats of stand-up comedy. Billy Crystal, Whoopi Goldberg, Jerry Seinfeld, Sarah Silverman, and Wanda Sykes will join Chappelle, Kevin Hart, and Chris Rock to honor and induct George Carlin, Richard Pryor, Joan Rivers, and Robin Williams into The Hall, which will have a physical home at the National Comedy Center in Jamestown, New York.

“It's our honor to transform LA for one week into the funniest place on earth,” Ted Sarandos, Netflix Chief Content Officer, said in a statement obtained by Bustle. “This festival is a unique celebration of the art of comedy, and the role it plays in reflecting our lives and defining culture."

Luckily for Netflix loyalists who aren't able to fly to LA, some of the most exciting shows will be recorded to stream on Netflix at a later date. But many sets will only be done live and in-person. So if you want to see other big names on the line-up, like Chelsea Handler, Pete Davidson, or Ken Jeong, you'll actually have to *gasp* leave your bed.

Netflix Is A Joke Fest will take over LA from April 27 to May 3. Pre-sales start on March 3, with tickets going on sale to the general public on March 6. Sadly, the price of tickets are not included in our subscriptions.