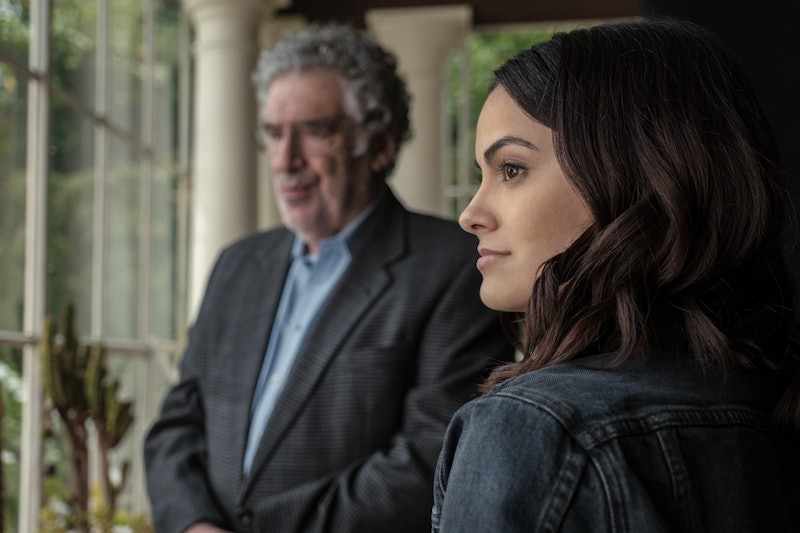 Fans of Rian Johnson's murder mystery Knives Out eagerly awaiting the sequel, you still have to wait for a while. However, Netflix's new Dangerous Lies trailer gives off major Knives Out vibes, and it could be just the thing to satisfy your Knives Out craving — just without all the New England knitwear. On Monday, Netflix dropped the trailer for Dangerous Lies, which stars Camila Mendes as Katie Franklin, a caregiver for a wealthy and elderly man named Leonard, who passes away after just four months under her care. Sound familiar?

Unexpectedly, Leonard names Katie the sole inheritor of his massive estate. But the fortune comes with strings attached, especially when a mysterious man shows up on the doorstep of Katie's new home posing as a real estate agent, drawing her into a dangerous trap of lies and murder. But, before you think that you already know how this movie will end, think again. Based on the trailer, Dangerous Lies will definitely be full of its own unique twists and turns.

The Netflix film has more of a horror bent, with the new residents of the home being pursued by a mysterious man and finding a suspicious chest of cash hidden in the home. At the end of the trailer, an unidentified hand inches toward Katie, suggesting that the former-caregiver's inheritance might have dangerous repercussions for all involved.

The cast of Dangerous Lies will look familiar to CW fans, Mendes, best known for her role as Veronica Lodge on Riverdale, is well-acquainted with roles involving mysteries or deception. Katie's husband, played by Jessie Usher, might look less familiar, though the actor has appeared in Starz's Survivor's Remorse and Independence Day: Resurgence. And then there's the potential villain Mickey will be portrayed by Cam Gigandet, another television veteran best known for playing Kevin Volchok the The O.C. Fans might also recognize him as another notable movie antagonist — Gigandet also played the evil vampire James in Twilight. Elliot Gould, who stars as Leonard, and Jamie Chung, who plays Leonard's attorney, round out the all star cast.

Dangerous Lies premieres on Netflix on April 30, and will likely be a welcome distraction amid the ongoing social distancing measures in place due to the coronavirus pandemic. The Knives are out, the sweaters are on, and the Netflix is all queued up.

More like this
Netflix Shut Down 'Bridgerton' S3 Rumours About A “Very Dark” Storyline
By Bustle
Here’s Everything Coming To & Leaving Netflix In February
By Jake Viswanath
'The Queen’s Gambit' Season 2 Tweet Wasn’t From Anya Taylor-Joy
By Mary Kate McGrath, Jack Irvin and Grace Wehniainen
'Wednesday' Star Emma Myers Thinks A Wenclair Storyline Is “Possible” In Season 2
By Alyssa Lapid
Get Even More From Bustle — Sign Up For The Newsletter
From hair trends to relationship advice, our daily newsletter has everything you need to sound like a person who’s on TikTok, even if you aren’t.