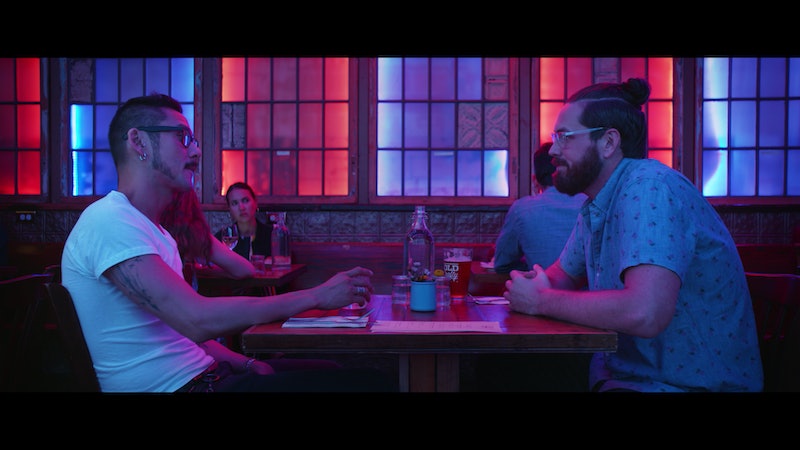 Dating is rarely easy. In fact, most of the time it can be downright stressful. That's why the trailer for Netflix's new reality series Dating Around feels so authentic since it completely captures the difficulties and uncertainties that singles face when it comes to navigating relationships, whether they last a single evening or a lifetime or fall somewhere in-between. Love is complicated and this show — which appropriately makes its Netflix debut on Valentine's Day — has no qualms about making that fact known. Think of it as The Bachelor IRL: it might not be super romantic, but it just might make you believe in love.

Here's the general gist of the show: each episode will center around one individual who will proceed to go on five first dates in the hopes of making a genuine connection with someone. And while some meet-ups will prove to have more potential than others, the journey is what makes it all so interesting. Just like in real life, there will be equal amounts of super flirty and extremely awkward moments that will make you reminisce about some of your own rather cringe-worthy dates. So will anyone meet their perfect match by the end of it all? Viewers will just have to snuggle up on the couch this Feb. 14 to find out whether love is in the cards for these particular matches.

“To the first blind date of my life,” one single is shown saying in the teaser. “Hopefully you’re not a serial killer.” (It's a thought anyone who has ever been on a first date has had at some point, if we're being honest.) Meanwhile, others are simply trying to find a way to open up and get the conversation going. “I’m like the goodie girl,” another single remarks in the trailer. “I’ve never done a drug. And you?” To which her date replied, “Yeah, I love them!" How... sweet?

Then, when it's time for the date to come to a close, the couples are then left with an important decision to make: do they want to see each other again or has the relationship (brief though it was) run its course? Odds are not everyone will share great chemistry together, but hopefully some true connections are able to come out of the woodwork throughout the series.

The official Netflix synopsis of Dating Around, reads as follows:

"Every episode, one single goes on five first dates filled with flirty banter, awkward exchanges and moments of true connection. Who will get a second date? Netflix's first original dating show takes an honest and compelling look at the real world of dating."

This will be the streaming service's very first dating original dating show, so considering how well the platform has done in the romantic comedy department in recent years, chances are this could very well become your next new TV obsession. Perhaps it'll even help give you a renewed hope about relationships — or end up further cementing your worst fears about how awkward first dates can be.

Either way, this show will take an honest look at the dating world and allow all of us out there to feel more seen than ever before.

More like this
Love Is Blind’s Natalie Claims Shayne Signed Up For 'Perfect Match' While They Were “Still Together”
By Brad Witter
Yes, That's Christina From 'The Bachelor' In Taylor Swift's "Fifteen" Music Video
By Brad Witter
All The Clues About Aly & Zach’s Relationship Status After 'The Bachelor'
By Brad Witter
'Love Is Blind: After The Altar' Season 3 Has A Release Date & It's Very Soon
By Grace Wehniainen
Get Even More From Bustle — Sign Up For The Newsletter
From hair trends to relationship advice, our daily newsletter has everything you need to sound like a person who’s on TikTok, even if you aren’t.