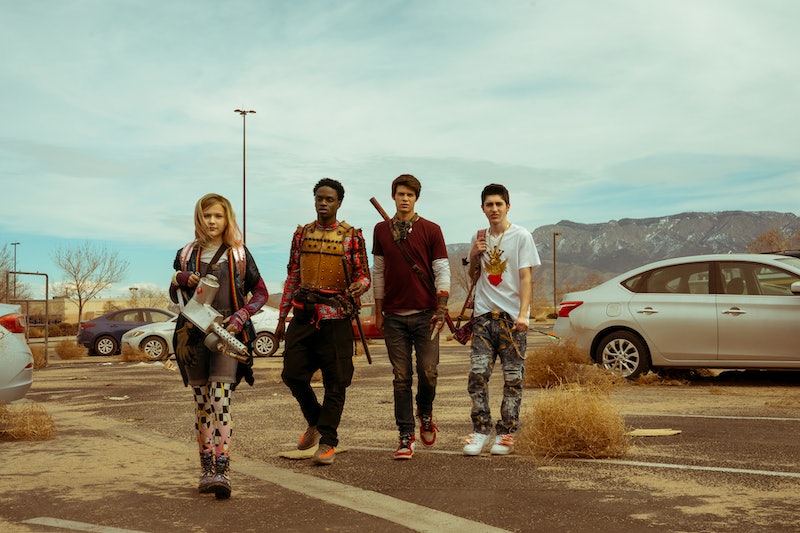 When you're in high school, the smallest disruptions can feel like the end of the world. Now, imagine being in high school when the actual end of the world comes around. Sounds a lot scarier than AP Bio, right? Well, the trailer for Daybreak, Netflix's new dystopian dramedy series, just dropped, and its making that nigntmare into a reality. The show takes place in a post-apocalyptic world where teens are forced to form their own tribes and navigate without any guidance from adults — thanks to a nuclear blast that has turned them all into blood-thirsty zombies.

According to a press release obtained by Bustle, Daybreak follows "marauding gangs of jocks, gamers, the 4-H Club, and other fearsome tribes" in Glendale, California, "who are kicking ass as they fight to survive in the wake of a nuclear blast (on the night of Homecoming…ugh)."

The series primarily focuses on a kid named Josh Wheeler (played by Colin Ford), as he and his friends attempt to find his missing girlfriend, Sam Dean (Sophie Simnett), amongst the chaos and destruction. It definitely doesn't seem like their journey will be easy — think Mad Max meets Warriors with some comic relief —  but they look like they're way better equipped for the challenge than you might expect.

At the beginning of the trailer, the apocalypse has yet to hit. "Buzz, buzz, Hornets," Principal Burr (played by Matthew Broderick) says to the students in his morning announcement. "It's another gorgeous Glendale morning, where it's always 82 degrees of opportunity. I look at you scholars and I see infinite possibilities," he continues, "so, don't wait to throw yourself into becoming the best you that you can be."

After that, though, we get a glimpse of what's to come: The cheerleaders become warrior women with bows and arrows, the jocks are blood-thirsty barbarians on a seriously destructive power trip, and nobody's parents will be able to fight their battles for them this time around.

Coleite then went on to add that Daybreak has, "this optimistic view of the end of the world. It immediately transported me back to high school and feeling like, 'Man, I would love it if the world ended right now because I could totally reinvent myself. I could be anybody else.' And I think that that’s a really common thing that a lot of us felt in high school." He's not wrong about that.

So, will Josh and his crew succeed in their mission to find and rescue Sam? Will they even survive at all? For now, both of those things remain unclear. They've certainly got their work cut out for them, that's for sure. The whole thing looks like it's going to be a hilariously terrifying wild ride, so strap on your seatbelt and get ready to rumble. Daybreak hits Netflix on Oct. 24.

More like this
Armani Jackson Is Following In His Famous Actor Sister’s Footsteps
By Catharina Cheung
Ashton Kutcher Wants Danny Masterson “To Be Found Innocent” In Rape Retrial
By Jake Viswanath
'The Queen’s Gambit' Season 2 Tweet Wasn’t From Anya Taylor-Joy
By Mary Kate McGrath, Jack Irvin and Grace Wehniainen
'The Crown' Season 6 Has Suspended Filming "Out Of Respect" For The Queen's Death
By Bustle Staff
Get Even More From Bustle — Sign Up For The Newsletter
From hair trends to relationship advice, our daily newsletter has everything you need to sound like a person who’s on TikTok, even if you aren’t.