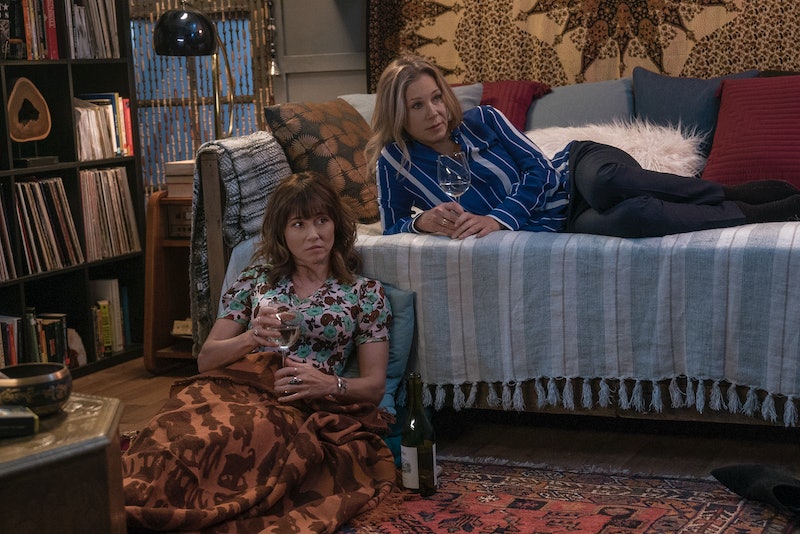 If you’re one of those people that declared your ex to be “dead to me” after the relationship ended, Netflix has the perfect show for you. Netflix's Dead To Me trailer, released on Monday, April 1, gave fans a first glimpse at the streaming service’s new dark comedy series. Dead To Me stars Christina Applegate and Linda Cardellini as widows with completely different personalities who become unlikely best friends, proving that opposites sometimes really do attract. The series marks Christina Applegate’s first TV series in six years, and by the looks of it, it was totally worth the wait.

Dead To Me follows Jen (Applegate), a woman determined to receive justice and solve her husband's murder after he died in a hit-and-run car crash. She keeps it together for the public, but her sardonic sense of humor shows how she's really struggling to grapple with his death. At a support group for widows, she meets Judy (Cardellini), a fun-loving free spirit who's gone through her own loss, and initially clashes with her before reluctantly opening up to her.

The trailer shows how Jen deals with her grief the only way she knows how: through sarcasm. (After unexpectedly bonding with Judy, she invites her newfound friend to stay in her guest house for some much-needed guidance and help, but shenanigans ensue as Judy tries to cover up a shocking secret. Jen, however, only wants to see the good in Judy. "She's the only person who has been here for me that doesn't make me feel like I'm failing at everything," she exclaims in the trailer. Misery loves company, after all.

Dead To Me also stars James Marsden and Ed Asner as principle figures in Judy's life. Asner is playing a patient who lives at the assisted living facility where Judy works. According to a description by Variety, the two are close friends, and it sounds like he'll be one of Judy's only trusted friends.

Marsden will play a love interest for Judy, a man "who seems confident and logical, but beyond that facade is a vulnerable man with a complicated past who is drawn to Judy’s big heart and free spirit," according to Variety's character description. Marsden makes a brief, yet very mysterious appearance in the trailer, warning Jen that “wherever Judy goes, chaos tends to follow." Not much else is known about his character, other than the fact that he looks good, obviously.

Applegate previously spoke about the show to ShowTickets.com, revealing that Dead To Me will of consist ten episodes and teasing that there’s a lot of cliffhangers throughout the show. “It’s very different tone-wise than anything we have seen,” she said. “It is very dark, emotional, sad, and often times funny.”

The new series was created by 2 Broke Girls writer and producer Liz Feldman. Applegate also serves as an executive producer, alongside Will Ferrell, Jessica Elbaum, and Vice director Adam McKay. The show’s highly-skilled comedic ensemble ensures that it will be one of the more hilarious Netflix Originals when it premieres on May 3, especially compared to their sci-fi hits like Stranger Things. Lucky for us, there's no Upside Down in Dead To Me, just wild friendships, secrets, and dead husbands.