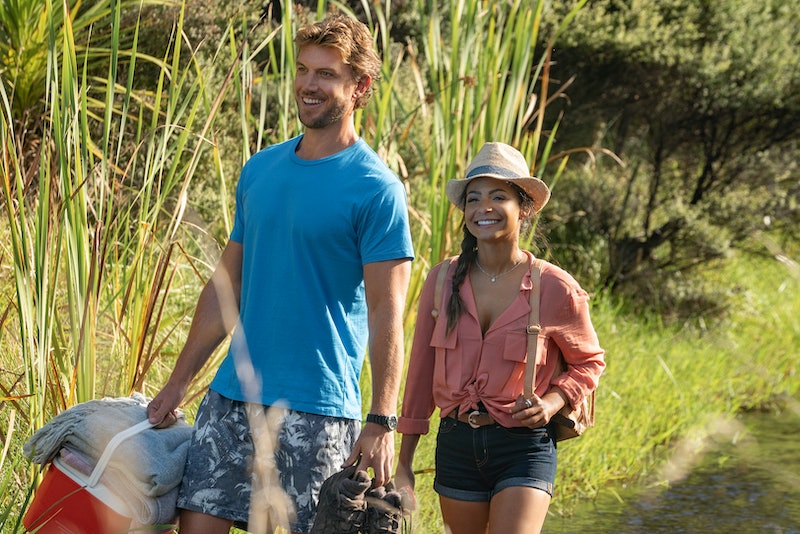 This is definitely going to be your next rom-com obsession. Netflix's Falling Inn Love trailer dropped on Wednesday and it looks so cute. The romantic comedy stars Christina Milian in the lead role of Gabriela Diaz and Adam Demos as her love interest, Jake Taylor. The movie was filmed in New Zealand, where it also takes place. Falling Inn Love seems like the perfect way to destress, all while making your heart flutter.

The movie tells the story of Gabriela, who travels to New Zealand after not only losing her boyfriend (played by Jeffrey Bowyer-Chapman, who costarred with Demos in UnREAL) and her job, but also wining a contest that gives her a rustic inn called The Bellbird Valley Farm. As adventurous as the fresh start sounds, Gabriela quickly learns that the inn is falling apart and also inhabits a wily goat named Gilbert. But, don't worry, Gabriela enlists Jake to help her renovate the space, so she can sell the property immediately.

Of course, and as you can see in the trailer below, Gabriela and Jake start to fall for one another and, well, everyone will have to wait to see if Milian's character chooses her new life or goes back to her old one. The plot sounds great and the trailer is true rom-com perfection. Milian and Demos make a great onscreen duo and their chemistry is fire.

There are many typical, yet sweet and heartwarming, rom-com moments throughout the trailer. For example, at the end of the teaser, what appears to be a snake falls around Gabriela's shoulders. Jake comes to her rescue and the end up two falling onto one another. They even almost kiss. However, Gilbert interrupts them. Way to go, Gilbert! As Jake says to the goat, "I thought we were friends, mate."

It seems like Milian and Demos had a great time working together. Demos has shared many photos with his Falling Inn Love cast on Instagram. Next to an image from March with Milian, he hilariously wrote, "Already miss working with my mate @christinamilian. What an epic human she is! And I know she probably won’t admit it but I know she'll miss me singing her song AM to PM to her everyday because to be honest i was absolutely crushing it #somebodyhitthelights #whatasong."

In response to Demos' caption, Milian wrote, "Demos! U are the best! Thank you. What a blast huh? Yes, your incredible vocals are missed. I will never ever hear a.m. to p.m. the same."

The romantic comedy was first announced in February 2019 by Deadline and is directed by Roger Kumble (Cruel Intentions). Falling Inn Love is written by Elizabeth Hackett and Hilary Galanoy. The writing team also wrote the 2013 Hallmark Christmas movie Fir Crazy starring Sarah Lancaster and Eric Johnson. Hackett and Galanoy are thrilled about their new project finally hitting Netflix. Hackett tweeted on Aug. 14, "I co-wrote this movie with @drunchmenu, the lovely people at Netflix bought it, the terrific @rogerkumble directed it, the truly delightful @ChristinaMilian stars, and now you can see it on August 29th." Galanoy shared her partner's tweet and gushed, "Everything my terrific writing partner (and partner in crime) said! So excited for the world to see this movie!"

Be sure to mark your calendars and set your Netflix reminders so you don't miss Falling Inn Love when it drops on Aug. 29. Most likely, you'll want to watch Gabriela and Jake fall in love from a.m. to p.m.