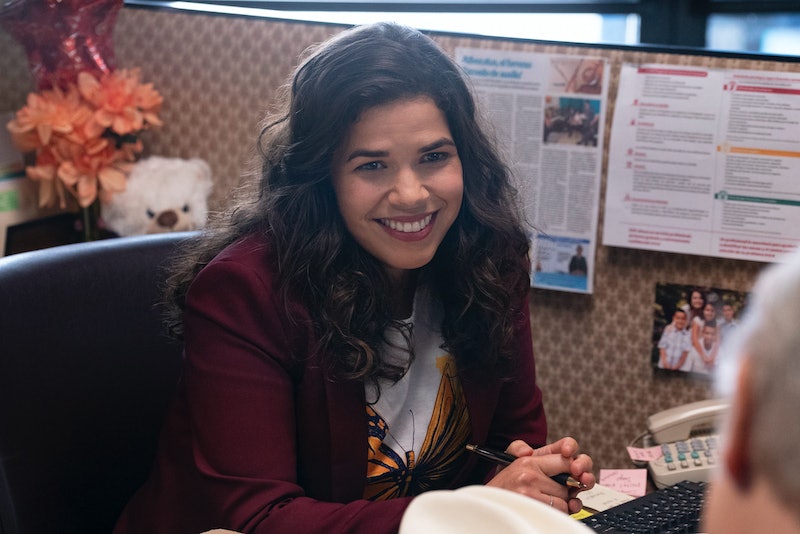 If there are two things you should be able to count on in life, it's family and tacos — both of which are prominently featured in Netflix's Gentefied trailer. The new Netflix show centers around an immigrant family trying to save their family’s taco shop in the Los Angeles neighborhood of Boyle Heights. And if that sentence just made you hungry, just wait until you watch the clip.

The bilingual series was adapted from a 2017 Sundance film of the same name and created by two first-generation writers, Marvin Lemus and Linda Yvette Chávez. America Ferrera and Wilmer Valderrama will both make guest star appearances throughout the 10-episode season and serve as executive producers on the project, which is slated to hit Netflix starting on Friday, Feb. 21 of this year.

According to the official synopsis provided to Bustle in a press release, Gentefied will telling the compelling story of three Mexican American cousins (played by Karrie Martin, J.J. Soria, and Carlos Santos), who "struggle to chase the American Dream, even while that same dream threatens the things they hold most dear: their neighborhood, their immigrant grandfather, and the family taco shop." The show will also make a point of addressing important themes, such as identity, class, and the struggles of social media.

Speaking of living out the American Dream, Ferrera could not be more thrilled to be connected to such an important project with a subject matter that is both near and dear to her heart. "It’s always been my guiding force to support and uplift young Latino creative voices, so that is a dream come true for me," she told The New York Times about Gentefied during an interview in March 2019. "That physical manifestation of gentrification is an internal experience that I as a first-generation American have felt on the inside for so long. This push and pull of where I come from, what of the past needs to remain but what also needs to grow."

Ferrera isn't the only one who feels a very personal connection to the characters and their stories, though. Showrunner Monica Macer admitted to The Hollywood Reporter in April 2019 that she saw a lot of her own upbringing in the series. "Being the daughter of an immigrant myself, I'm so proud to run a uniquely first-gen series that chronicles the trials and triumphs of the Morales family as they adapt, resist and lean into the changing landscape of L.A," she told the outlet.

And if you aren't craving delicious tacos by the end of each episode, then you may want to check your taste buds at the door.