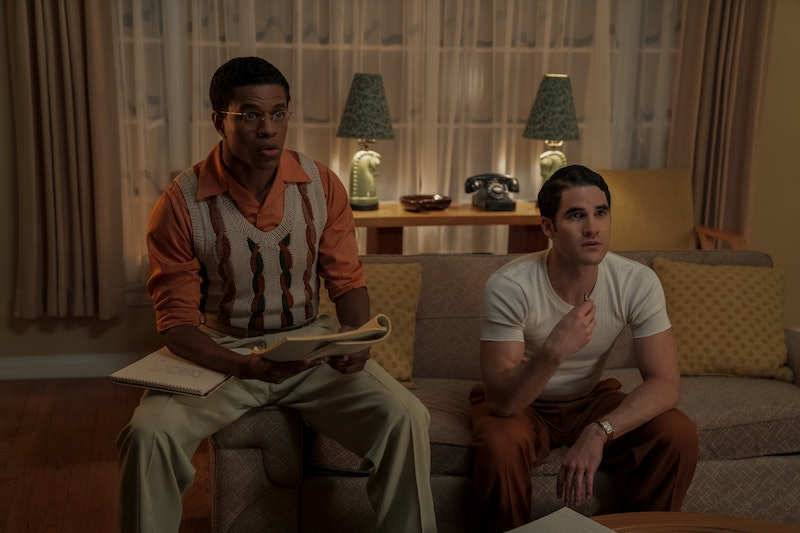 When one thinks of old-school Hollywood, the first things that usually come to mind are diamonds, onscreen heartthrobs, and Marilyn Monroe. But Ryan Murphy thinks of something a little bit more sinister. Netflix's Hollywood trailer shows Murphy's vision of post-WWII Tinseltown, an era often seen as glamorous, game-changing, and full of possibilities. But, as the trailer teases, the golden age of Hollywood may not have been so shiny after all.

The new Hollywood trailer shows a group of young actors and filmmakers who are set on making it big in a revitalized, post-World War II movie industry, including Murphy favorites David Corenswet (The Politician) as aspiring actor Jack Castello, and Darren Criss (Glee) as determined new director Raymond Ainsley. They're all willing to do whatever it takes to make their name known, but many are subject to much more than they expected.

As described in the official plot synopsis, the new limited series "exposes and examines decades-old power dynamics, and what the entertainment landscape might look like if they had been dismantled." From prostitution and sexual harassment to racism to homophobia and the fascination with homosexuality, these burgeoning young stars are faced with the challenges of an unfair system, with biases against racism, gender, and sexuality that still feel prominent to this day.

Hollywood features an ensemble cast of screen legends and rising stars that have become a signature of Murphy shows, including Laura Herrier, Samara Weaving, Patti LuPone, Holland Taylor, Maude Apatow, and Dylan McDermott. Some real-life figures are portrayed in the series as well, including Jim Parsons as controversial agent Henry Willson, Jake Picking as gay actor Rock Hudson, and Queen Latifah as Hattie McDaniel, the first Black actor to win an Oscar.

Even with the the series' very real inspirations, Murphy described the genre of the show to Vogue as "faction," where made-up characters are mixed in with historical figures in an alternate universe where they can all be the writers of their own stories. “What happens if Rock Hudson is out of the closet and successful in the 1940s?,” Murphy suggested.

Despite being described as a “love letter to old Hollywood,” Murphy is both exposing the seedy side of Tinseltown and rewriting movie history for the better. All seven episodes of Hollywood premiere on Netflix on May 1.