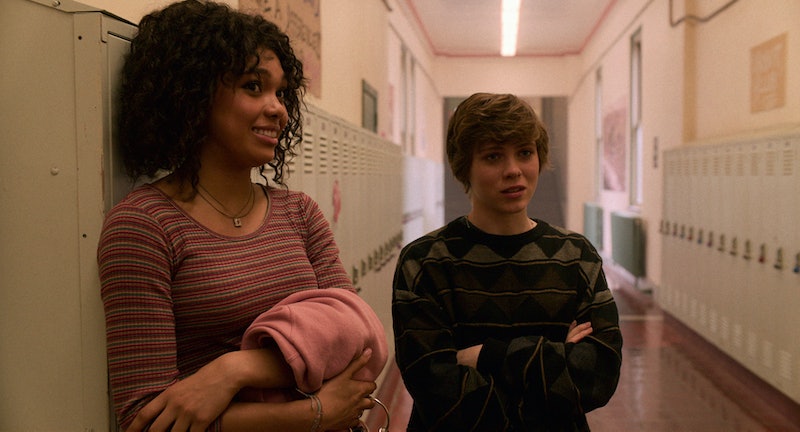 Did you ever want superpowers to help get through the awkward stages of being a teenager? Netflix's new series might make you think again. Netflix's I Am Not Okay With This trailer debuted on Monday, Feb. 17, and as the streaming service perfectly described it on Twitter, the show is basically "like if John Hughes made a superhero movie."

The new coming-of-age series features It star Sophia Lillis as Sydney, a jaded teenager "who's navigating the trials and tribulations of high school, all while dealing with the complexities of her family and her budding sexuality," according to Netflix's official plot description obtained by Bustle. She goes through life with her quirky but charming neighbor Stanley, played by Lillis' It co-star Wyatt Oleff, and best friend Dina, who Sydney just might secretly be in love with. But Dina is dating their school's "golden boy" Bradley (who Sydney not-so-secretly disdains), which complicates things just a little bit.

Oh, and of course, Sydney also begins to form mysterious superpowers, which seemingly reach their maximum potential when she gets angry. And no, it's not just her natural hormones talking. The trailer begins with Sydney running away from police cars, blood splattered all over her, as she narrates, "Dear Diary, go f"ck yourself," so basically, your angsty teenage self is in for a weird thrill ride.

In an interview with Vogue Australia, Lillis opened up about how Sydney is "relatable" to most high schoolers, despite having the gift and curse of superpowers. "She thinks of herself as almost dysfunctional, but in reality she’s dealing with it all rather well," Lillis said. "She is overwhelmed by her problems, so she shuts down and is in denial for most of the series. She’s also very awkward which makes her relatable. You can see she’s trying to do her best, trying to control her emotions, trying to live a normal life, but not everything goes her way.”

Netflix also teased that Sydney grapples with "her budding sexuality," which Lillis said is important to her character's development. “It’s something so many kids go through in that period of their life," she explained. "It’s a time when you’re trying to figure out who you are, so I think it needs to be in there and we need to talk about it.”

I Am Not Okay With This is based on the Charles Forsman graphic novel of the same name and comes from the producers of Stranger Things, making it an instant must-watch. The show premieres on Netflix on February 26, giving you yet another reason to stay under the covers and avoid leaving your comfy bed.

More like this
The First Trailer For 'That '90s Show' Includes So Many Nods To The Original Series
By Jack Irvin, Alyssa Lapid and Grace Wehniainen
'Bridgerton' S3 Teases Exciting Social Season For Penelope Featherington
By Bustle
The ‘Emily In Paris’ Season 3 Trailer Teases Major Career & Love Crossroads For Emily
By Bustle Staff
The 'Ginny & Georgia' Season 2 Release Date Is Only A Few Weeks Away
By Martha Sorren
Get Even More From Bustle — Sign Up For The Newsletter