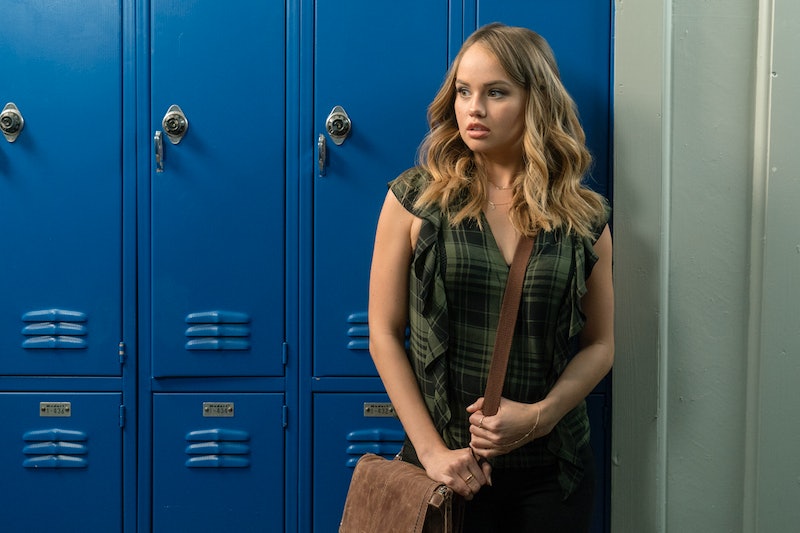 Netflix has become a hub for new and creative content, but according to Twitter, a new show called Insatiable may have completely missed the mark. When Netflix dropped the trailer for Insatiable, social media users were quick to critique the message of the new "dark comedy" as simply fat-shaming and fat-phobic. And now, the show is facing a ton of backlash, just a couple of weeks before it's August 10 premiere date.

The show stars Disney actor Debby Ryan as Patty, a teenager who receives daily abuse and ridicule from her classmates over her weight, which has prompted the nickname Fatty Patty. "High school was a nightmare," Ryan says in voiceover, as the two-minute clip scrolls through all the hurtful words that have been flung at Patty. "It smells like bacon," sneers a group of young women in gym class, as Patty jogs by. In the next shot, she sits alone at lunch as one of the popular girls strides confidently through the cafeteria, pointing at the high schooler and shouting over a megaphone, "Porky! Butterball!"

For this first portion of the plot, Ryan wears a fat suit, a decision which was the target of early criticism from viewers who wondered why a thin actor was cast in the role instead of a plus size actor. As Twitter user @imagineer tweeted on Netflix's posting of the trailer, very rationally explaining the backlash: "In case you didn’t know this already, Debby Ryan is not in fact, a plus size woman. Therefore, she is wearing a fat suit. This makes people uncomfortable, especially because there are people in the world who actually look like that and are human beings."

After establishing that her life is a living hell, suddenly, "salvation" beckons, in the form of a punch to the face that requires Patty's jaw to be wired shut for a few months. Unable to eat, she magically sheds the weight and finally becomes "attractive" in the eyes of her classmates. "Look! Patty's hot!" exclaims that same megaphone bully from before. And then, having found confidence at a skin-deep cost, Patty decides to exact revenge on those that wronged her when she was heavier.

After years of abuse, the transformed teen turns on her former tormentors, vowing revenge on everyone who made her life miserable. In a series of violence-glorifying cuts, Patty punches and slaps her bullies, in one case even setting one on fire.

The show's writer and executive producer Lauren Gussis seems to be aware of all the problems with the series, and was trying to parody them, not perpetuate them. As she told Teen Vogue:

"I really felt like it was important to look at [bullying] head on and talk about it. And what are young women and, frankly, young men taught about appearance and how much appearance matters and whether it's OK to look different and it's OK to be different, and the feeling of ‘not enough’ which kind of leads through all of the characters. Because every single character in this show has a hole that they're trying to fill and they're insatiable for something whether it be validation or love, or money or power."

Series star and vocal feminist Alyssa Milano, who plays Patty's mother, echoed this sentiment in a tweet defending the series, writing, "We are not shaming Patty. We are addressing (through comedy) the damage that occurs from fat shaming."

Unfortunately, despite their efforts to explain the show's intention, many Twitter users are not exactly thrilled with the show's message.

Some Twitter users, like @geamxs, felt the show's trailer appeared to reinforce the myth that "fat" means unlovable. The show is centered around a fat character's transformation, and per the trailer, discovered self-worth through her medically-forced transformation. And while yes, it is important to tell stories about women owning who they are, Twitter user @geamxs made the point that that doesn't mean the fat character needs to lose 70 pounds to do so. "... Give us a story where the fat girl stays fat, struggles, but learns to accept her body and overcomes societal standards," @geamxs said in a now viral tweet.

Another Twitter user, @RoAnnaSylver, made a similar point that "hotness" (and general badass-ness) can come from owning and seeking revenge as a presently fat character, too, and a show that would explore that storyline would be a "fresh and cool" take.

Besides the disappointing message that self-worth comes from losing weight and being seen as hot by peers that already suck, Twitter also has problems with the violence the show seems to celebrate in its trailer as some type of stat of revenge. As Twitter user @DavidJLightman said, "Let's stop telling our high school students that violence solves anything."

The show, while boasting itself as a dark comedy and satire, at the end of the day, sends a message to those watching. And if a portion of the audience of the show is already feeling "othered," as Twitter user @MerQueenJude said above, then you have to step back and ask if the show really is succeeding in satire, or just completely missing the mark.

More like this
The First Trailer For 'That '90s Show' Includes So Many Nods To The Original Series
By Jack Irvin, Alyssa Lapid and Grace Wehniainen
17 Photos Of The 'Wednesday' Cast Vs. The 1991 'Addams Family' Cast
By Grace Wehniainen
The 'Firefly Lane' Book Ending Teases Way More Tears To Come In 2023
By K.W. Colyard
Everything To Know About 'Firefly Lane' Season 2 Part 2
By Gretchen Smail
Get Even More From Bustle — Sign Up For The Newsletter