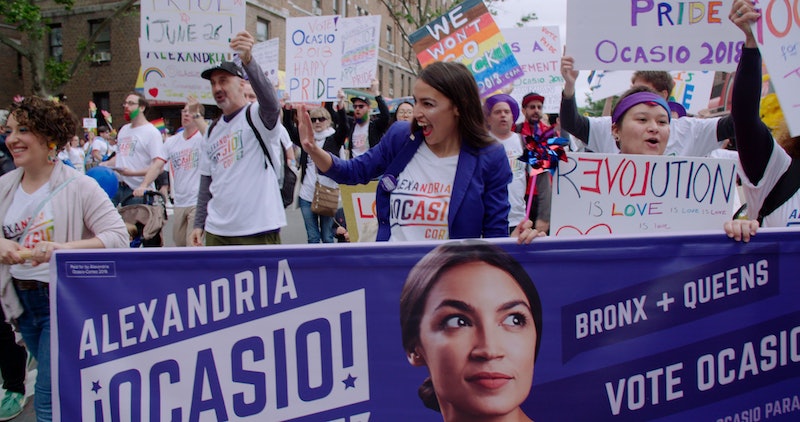 The current political landscape is so depressing, it can make one burst into tears of sadness at any given moment, but Netflix’s new political documentary Knock Down the House might actually make you cry tears of joy instead. Netflix’s Knock Down the House trailer shows Alexandria Ocasio-Cortez and three other female progressive Democratic candidates as they set up landmark primary campaigns against establishment Democrat incumbents in the 2018 midterm elections, and their stories will surely inspire you to take action in your community — and probably cry a little bit more.

Director Rachel Lears followed Cori Bush of Missouri, Amy Vilela of Nevada, Paula Jean Swearengin of West Virginia, and Ocasio-Cortez of New York for the documentary, giving viewers a look at their stories and why they wanted to dive headfirst into politics. The trailer gives glimpses of the four trail-blazing women as they take us behind the scenes of their historic campaigns, and show the inspiring, the ugly, and the downright exhausting aspects of running for office. “If I was a rational person, I would have dropped out of this race a long time ago,” Ocasio-Cortez says in the opening moments of the trailer.

Knock Down the House highlights the many stigmas and stereotypes that women in politics are faced with when they try to do something genuinely impactful in their field. As remarked in the trailer: “For one of us to make it through, a hundred of us have to try.” In this case, Ocasio-Cortez was the only one of these four women to win her race, and she went on to become the youngest woman in Congress (not to mention a favorite target of Fox News) after she was elected into the House of Representatives. “I get scared of the cynicism from people really believing in something and then it not working out,” she remarks in the trailer. “I just don’t wanna let them down.” Given her track record thus far, she’s on the right path to not let that happen.

The documentary aims to help people learn more about what really goes on in their communities. “We hope Knock Down the House engages people to think about the intrinsic relationship between money in politics and representation, and inspires them to participate in new ways, from voting to organizing to running for office,” Lears told Doc10 in an interview. “We especially hope that the film can reach people who feel left out of the political process or cynical about how it works—they might see themselves reflected in our protagonists and their communities, and the story might convey a bit of hope for how democracy can work."

Lears is already achieving her goal even before her film hits Netflix. Knock Down the House won the Festival Favorite Award and the Audience Award in the U.S. Documentary category at the Sundance Film Festival, as noted in a press release obtained by Bustle, and it's sure to make its greatest impact when it gets released on Netflix and in select theaters on May 1. Who knows, maybe it will inspire some women across the country getting ready for 2020 or 2022.