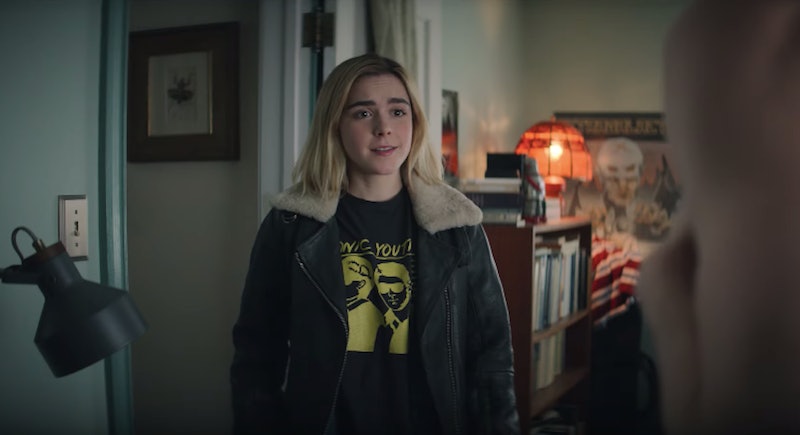 Sabrina Spellman's favorite holiday may be Halloween, but in the trailer for Netflix's new teen movie Let It Snow, Kiernan Shipka's character is all about that winter wonderland life that looks to be a far cry from the dangers of Salem. In fact, the only dangers that lurk among the snow-covered scenery is the typical drama that comes with being a teenager. This includes relatable things like young love, rejection, and... nipple shaving?

Based on the 2008 novel by John Green, Maureen Johnson, and Lauren Myracle, the movie aims to explore the love lives of various characters whose stories end up loosely connecting in unexpected ways around the holiday season. The premise is definitely meant to give you major Love Actually vibes, but with a hearty helping of teen angst thrown into the mix. And while Shipka's Let It Snow character is a far cry from her witchy role on Netflix's Chilling Adventures of Sabrina, there is one thing they do have in common: they're both part of a love triangle. Granted, this new character is completely oblivious to the fact that her best friend, Tobin, is in love with her, while Sabrina is very much aware of Harvey and Nick's feelings for her, but it still makes for an interesting parallel.

The majority of the action in the film takes place on Christmas Eve in a small midwestern town called Gracetown that's on the brink of a major snowstorm. At the heart of it all is a group of high school seniors whose friendships and love lives become more and more entangled as the movie goes on. The various storylines include "a stranded pop star, a stolen keg, a squad of competitive dancers, a mysterious woman covered in tin foil, and an epic party at the local Waffle Town," as per the official synopsis.

“The holiday season is the one time of year that just feels full of possibility, anything can happen, especially romance," Let It Snow director Luke Snelin told Teen Vogue during a recent interview about the film, which is set to hit the streaming platform on Nov. 8. "People come together, they go back home to the places they grew up, old flames and new can get ignited.”

Christmas has been said to be the most wonderful time of the year. And it's that sentiment that Snelin is looking forward to exploring the most — the magical possibilities that come with Yuletide joy. "They don’t know what’s going to happen next, who they might meet or fall in love with and that’s exciting and unpredictable and wild," Snelin added. “I love the idea that this Christmas Eve is one they will talk about for years to come, the one that changed them all forever."

As Love Actually proved, it's amazing how one individual can serve as a vital part of so many other stories. And now, Let It Snow intends to show how one magical night can change your life forever.