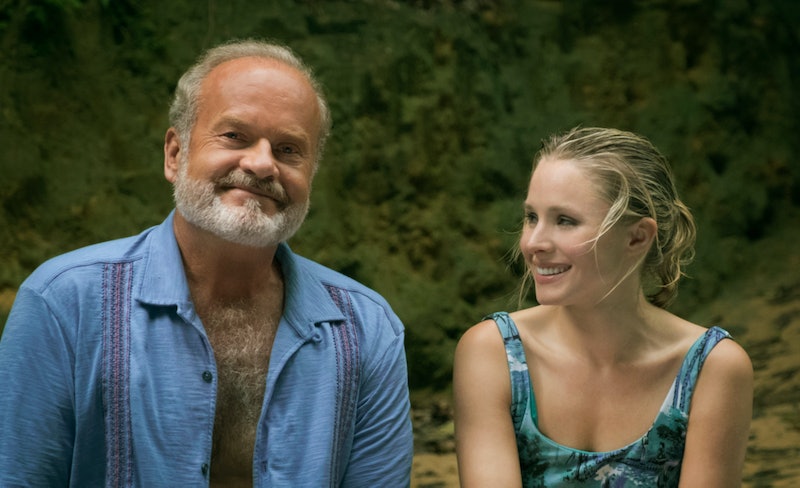 Ever imagined what your honeymoon might look like if Dad tagged along, too? To all the readers furiously shaking their heads, thinking, "uh ... no" — that totally makes sense. After all, honeymooning with your ol' man in tow isn't exactly the picture-perfect post-wedding celebration most betrothed folks dream about. That being said, it is the situation Kristen Bell finds herself grappling with in the new trailer for Like Father, which Netflix released on Monday afternoon, June 18.

If the trailer is any indication, the upcoming Netflix original looks poised to take an interesting spin on the age-old adage from which it gleaned its title — "like father, like daughter." Bell's character might spend an inordinate amount of one-on-one time with her dad (played by Kelsey Grammer) in Like Father, but that certainly doesn't mean she enjoys it. At the beginning of Like Father, it seems like the daughter will be more like the polar opposite of the father than similar to him. After watching the new trailer, it's pretty clear that the estranged father-daughter duo hasn't spent quality time together in quite a long while. But still, judging by the video, it looks like the two might have more in common than they originally thought.

For those still wondering how on earth Bell and Grammer's fictional father-daughter pair ends up taking a honeymoon trip together in the first place, the confusing ordeal transpired in perhaps the messiest of ways. Luckily, Bell's character — a "workaholic young executive," according to Netflix's description — sums up the gist of the whole situation pretty succinctly in the trailer. "I was left at the altar a few days ago," Bell's voice explains at the video's opener, while an eerily cheery musical interlude kicks up in the background. Her character then goes on to chronicle the truly bizarre series of events that followed.

As Bell's character goes on to say, those events pretty much exclusively revolve around her father, who, by the way, she hasn't seen since she was 5 years old. (The trailer doesn't explore this tidbit in too much detail, though Netflix's description, which similarly labels Grammer's character a "workaholic," seems to suggest the reason for his absence as a parent.) Still, according to Bell's character, he made it to her wedding — albeit, without giving his daughter a heads up beforehand. And, as if that scenario alone doesn't already sound like way too much for a person to handle, especially after just having been left at the altar, there's more. After explaining how she was left at the altar and reunited with her absentee dad, Bell's character hits viewers with a real doozy:

"The two of us got incredibly drunk that night, and I must have blacked out because ... Somehow, I dragged him onto this cruise that was supposed to be my honeymoon."

All of a sudden, the camera pans away from Bell to reveal her listener's face. It's Seth Rogen, who plays Bell's newly-minted love interest while aboard her markedly unorthodox honeymoon cruise. Suffice to say, Rogen's character reacted to Bell's dad-themed vent session the way anyone might have upon hearing a similarly absurd story. "That's f*cked up," Rogen's character tells her matter-of-factly. Judging by the exceedingly bizarre video montage that follows, it seems safe to say that he's totally right — this is one messed up honeymoon cruise.

Just to give a sense of how messed up it really is, the trailer includes a chipper comment from one cruise staff member who informs Bell's character that she's successfully secured the "Honeymoon Suite," and congratulates her. And, while she might've been over the moon about that particular perk had her husband been there with her, now, Bell's character can only grimace. "Ew, that's my dad," she shoots back. It's funny because it's every child's worse nightmare.

While Bell and Grammer's estranged father-daughter characters do seem to engage in quite a bit of tumult in Like Father, it certainly seems like the two find their way back into each other's good graces by the film's end. Who knows? Maybe the antidote for a strained parent-child relationship boils down to a little bit of sun and a whole lot of quality time. Even the accidental kind.