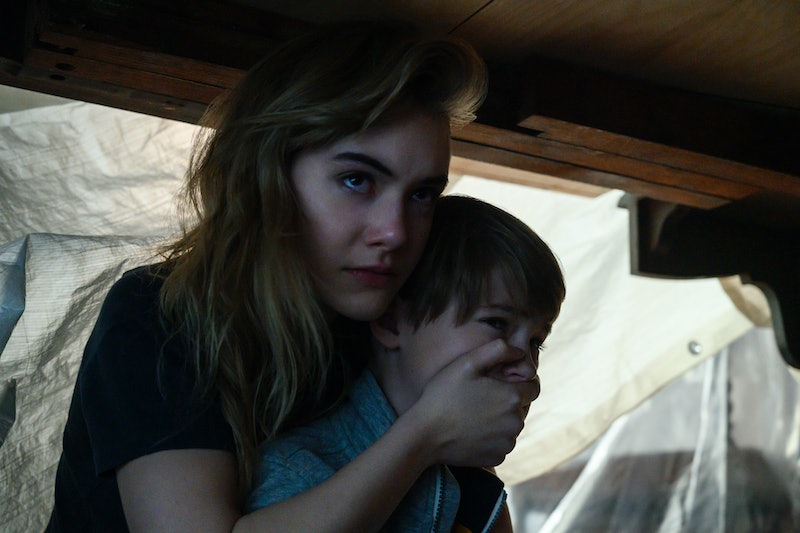 If you're a fan of Netflix's Stranger Things and The Haunting of Hill House, the Locke & Key trailer should be right up your alley. The official teaser for Netflix's latest drama dropped on Wednesday, Jan. 8. And based on the almost three-minute clip, the series is yet another one you might want to watch with the lights on.

The trailer opens with the Locke children (IT's Jackson Robert Scott, American Crime's Connor Jessup, and Horrible Histories' Emilia Jones) and their mother, Nina Locke, (Scandal's Darby Stanchfield) moving into their new home, "Keyhouse," after their father, Rendell Locke (Bill Heck) is murdered under mysterious circumstances. They soon realize the house has its own mysteries, including magical keys that could be tied to their father's death. But, they soon get in over their heads, awakening a kind of demon that wants the keys for itself.

Based on the comic book series of the same name from IDW by Joe Hill and Gabriel Rodriguez, Locke & Key gives off major haunted house vibes. Combined with the young adult protagonists, and you've got the Stranger Things meets Hill House cocktail of your marathon-loving dreams.

And if that isn't enough, be sure to watch the trailer to the very end. Not only are there creepy whispers, but the link to a website called RendellLockeIsDead.com appears. You definitely want to type that in your search bar, because the link takes you to a YouTube of the very first scene of Locke & Key.

The opening scene shows a man arriving home, who then receives a phone call from an anonymous woman informing him "Rendell Locke is dead." He's very upset and declares, "I know what I need to do," before scurrying around his house. Be sure to watch the clip in its entirety yourself (below) and see exactly what the man ends up doing. Let's just say one of the previously mentioned magical keys is involved and it's not used to unlock a door.

Every Locke & Key episode will officially be unlocked on Feb. 7. When watching, not only will viewers definitely want to keep their lights on, but they probably want to also make sure their doors are — locked.

More like this
'Bridgerton' S3 Teases Exciting Social Season For Penelope Featherington
By Bustle
The First Trailer For 'That '90s Show' Includes So Many Nods To The Original Series
By Jack Irvin, Alyssa Lapid and Grace Wehniainen
This 'Black Panther' Character Is Starring In Her Own Marvel Show Next Year
By Grace Wehniainen
'Wakanda Forever' Is Already Opening Doors For Mabel Cadena
By Grace Wehniainen
Get Even More From Bustle — Sign Up For The Newsletter