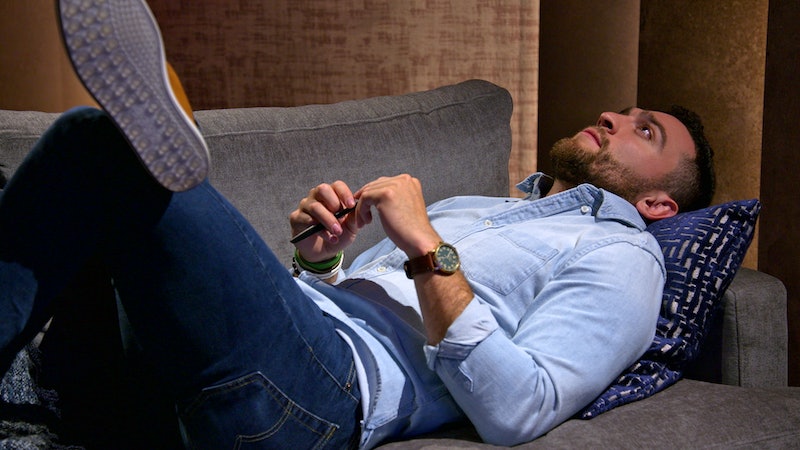 Netflix wants to help people find true love this Valentine's Day — or at least, help them stay entertained with a good helping of reality TV drama. On Thursday, Jan. 30, Netflix released the first trailer for their upcoming dating series, Love is Blind, in which a group of singles attempt to fall in love and get engaged, without ever seeing what the other person looks like. Think The Bachelor meets 90 Day Fiancé, with a dash of Married at First Sight.

Much like the streaming service's last reality TV hit, The Circle, the ten-episode first season will be released on Netflix over the course of three weeks beginning on February 13. Beginning with the first batch of episodes, the contestants — who are isolated from the world and from each other in their respective "pods" — will "talk to a stream of potential love interests and when a meaningful connection is made, they propose and then lay their eyes on their fiancé for the first time," according to Netflix's official synopsis.

However, once each pair is engaged, they'll head back out into the real world to see if their relationships can survive outside of the reality TV bubble. With a "fast-approaching [wedding] ceremony" on their minds, the couples will have to see if their physical connection matches the emotional ones that they made on the show — and based on the shot of one bride running away, with her veil flowing behind her, it seems like not every couple will get their happily ever after.

"I've found the woman I want to spend the rest of my life with," one contestant says at the start of the clip. "I have no idea what she looks like." Though he later adds that "ethnicity, race, physical appearance" don't matter on the show, it seems like all of those things start to take a toll on him after he and his wife-to-be head back into the real world and meet each other's families. "This marriage is tearing me and my family apart," he says near the end of the clip.

Of course, familial approval isn't the only barrier the new couples will have to overcome after their decide to get engaged to a complete stranger: there are fights over honesty, student loan debts, interracial relationships, and people "bringing [each other] down." And you thought this season of The Bachelor was dramatic.

Despite the dramatic, tear-filled ending of the trailer, Love is Blind also has the potential to help some singles actually find the love of their lives. "I can't see my life without you," a male contestant says at one point, while another tells his partner that she has become "the most important thing in my life" over the course of this process. "This is fate, this was meant to be," one woman says, so hopefully viewers will get to see some of the contestants have a marriage as picture-perfect as hosts Nick and Vanessa Lachey.

Love is Blind will premiere on Netflix on Feb. 13, with new batches of episodes arriving over the next two weeks. The whole thing will wrap up with a two-hour finale on Feb. 27, where viewers will discover — once and for all — if love really is blind.