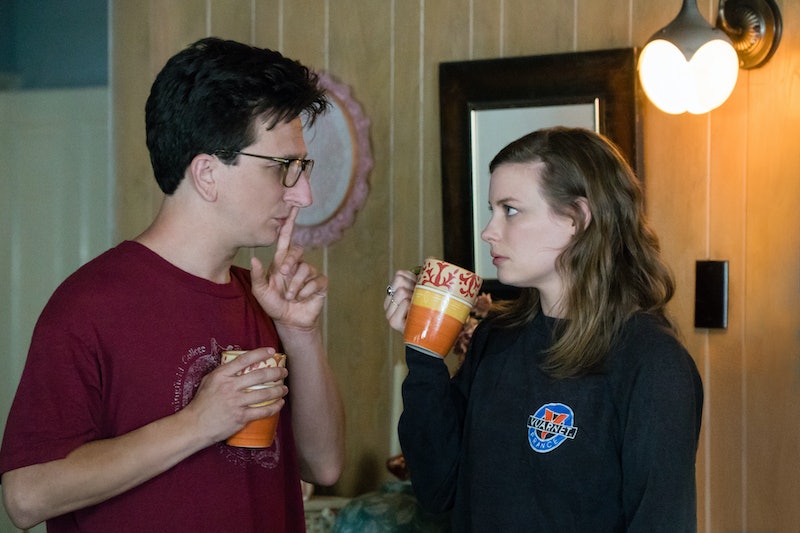 Netflix's comedy series Love premiered its third and final season on Friday, March 9. That's right — the ballad of Gus and Mickey is coming to an end and Love won't return for Season 4. According to The Hollywood Reporter, Netflix and executive producer Judd Apatow agreed to end the series after its third season. Apatow co-created the series with Paul Rust (who plays Gus) and Lesley Arfin.

"I am really excited about the third season of Love," Apatow told The Hollywood Reporter in December 2017. "I think it is our sweetest, funniest season and ends our story in a beautiful way." Netflix VP of Original Series Cindy Holland told the publication:

“We couldn’t have hoped for better companions to go on this journey of Love with than the incomparable Judd Apatow, Gillian Jacobs, Paul Rust, Lesley Arfin and the rest of the fantastic cast and crew who have brought this special series to life. Over three seasons, viewers around the world have laughed, cringed and cried with Mickey and Gus, and we are excited to share this concluding journey with their fans."

Love has chronicled the relationship between Gus and Mickey (played by Gillian Jacobs), but they are far from being a standard romantic comedy couple. Could that mean Gus and Mickey will get a more realistic ending, rather than a standard happy ending? The series has aimed to break rom-com conventions and has shown viewers a very down-to-earth portrayal of relationships.

Love has followed Mickey and Gus them from their meet-not-so-cute to their many makeups and breakups. Mickey has struggled with addiction, while Gus has battled his own insecurities. Of course, the couple has also had to deal with their respective exes and roommates sometimes getting in the way of their romance.

In Season 2, Gus and Mickey grappled with both being apart and being together. At one point, Mickey even reunited with her ex Dustin and hid it from Gus. In the season finale, Mickey told Gus she wanted to have an exclusive relationship with him — even though he still has no idea about her kind of affair with Dustin while Mickey was out of town. Uh oh.

Netflix dropped the trailer for Love Season 3 on Valentine's Day and it shows that Mickey and Gus are taking things more seriously this time. At one point, Mickey says in the trailer, "I want to do this right. I want to be in a real, adult relationship." In the trailer, they run into one of Gus' exes (played by Vanessa Beyer) at a formal event and Mickey seems to remain certain something will go wrong between her and Gus. Later in the trailer, Mickey's roommate Bertie discovers that her boyfriend Randy sleeps in his car. It also looks like Gus continues his job as an on-set tutor for kid actors and Mickey's job at a satellite radio station continues to challenge her. Most important of all, it looks like Mickey and Gus finally seem happy together as a couple.

Even after last season's dramatic end, the Season 3 trailer showed no indication of Mickey telling Gus about Dustin, so perhaps it's a forgotten memory and Mickey and Gus have moved on. Of course, how Love ends still remains to be seen — could they go the conventional route and get married? End up engaged? Or do Mickey and Gus have another unconventional conclusion in mind?

No matter what, we have to remember the series is called Love — and it's clear that Mickey and Gus have found it with each other in all of its complicated forms.