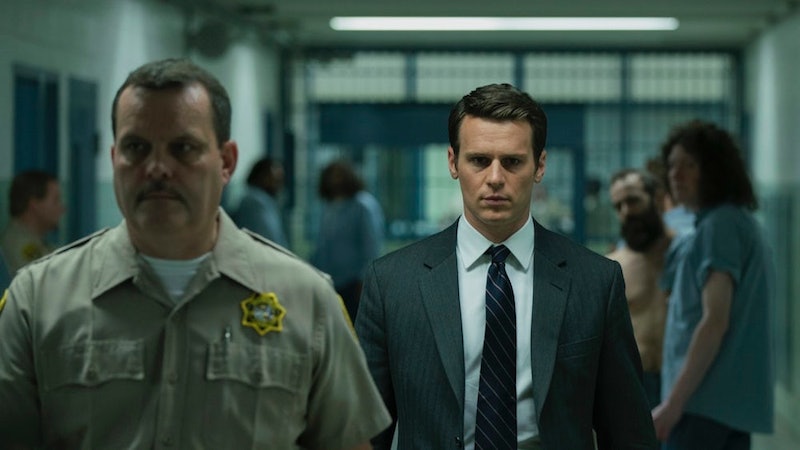 Nearly two years after its acclaimed debut, a Mindhunter Season 2 premiere date is finally here — and that's not all. In addition to announcing the premiere date, director David Fincher also revealed what the new season is all about. Season 1 of the Netflix crime drama followed FBI agents Holden Ford (Jonathan Groff) and Bill Tench (Holt McCallany) as they examined the psyche of serial killers during the infancy of criminal psychology and behavioral analysis. But for its second season, premiering Friday, August 16, the show will focus on one particular wave of cases.

In a recent interview with IndieWire, Fincher revealed that Season 2 of Mindhunter would include the Atlanta Child Murders, Charles Manson, and Son of Sam — with the Atlanta Child Murders serving as the central narrative in the new season. "You could probably do three seasons on the Atlanta Child Murders. It’s a huge and sweeping and tragic story,” Fincher said. “We couldn’t do it justice in the background of our nine hours. We had to choose to dramatize." He went on, setting the stage for the introduction of the case to Holden and Bill: "[The FBI] are the last guys in, they’re trying to help out something that has its own momentum and politics. It’s a divided battlefield.”

The Atlanta Child Murders, also referred to as the Atlanta murders of 1979–81, were a series of murders committed against at least 29 African American children, teens, and adults in Atlanta, Georgia between July 1979 and May 1981. According to the FBI, the investigation concluded in 1982 after Wayne Williams was convicted of two of the murders. After the trial, Williams was linked to 20 more of the murders, according to FBI records of the case. Williams, who is currently serving life in prison for the killings, will play a significant role in the sophomore season of the serial killer drama, which, according to IndieWire, will pick up "in the back half of the investigation as the FBI is called in to Georgia."

According to Fincher, The Assassination of Jesse James director Andrew Dominik will also be involved in the follow-up season. “I got a call from Andrew Dominik who had seen the first season and said, ‘I’d really like to do something with Season 2,’” Fincher told IndieWire. “We brought him in. When God gives you a really great idea, take it. When we first sat down he said, ‘What is it about this world that seems so American? There is something going on here.’ I said the show is about narcissism. The show is about needing to be seen.”

The first season of Mindhunter examined the infancy of criminal investigative work in psychological profiling. Season 2, however, will explore an atmosphere of emerging interest in serial killers — one where these grizzly conversations are very much out in the open. “In the ‘70s, post-Manson, post-Son of Sam, post-Zodiac... There was this transition. I remember it happening with Son of Sam," Fincher explained. "When I left the Bay Area in the mid 1970s and our parents moved to Oregon, you go 300 miles north and nobody talked about Zodiac. It had been this festering thing that had never been brought to any kind of closure but no one cared about it [outside of the Bay Area]."

Fincher continued, “Then Son of Sam came, and it was Newsweek and Time, the cover. I remember conversations at the family dinner table about Son of Sam. We didn’t have those conversations about Zodiac, granted I was in the second grade and it was probably too distressing to talk about this stuff. But when I was a teenager, these conversations were had out in the open.”

Mindhunter will return to Netflix for Season 2 on August 16. And, come August, something tells us these conversations about serial killers will be had out in the open once again.