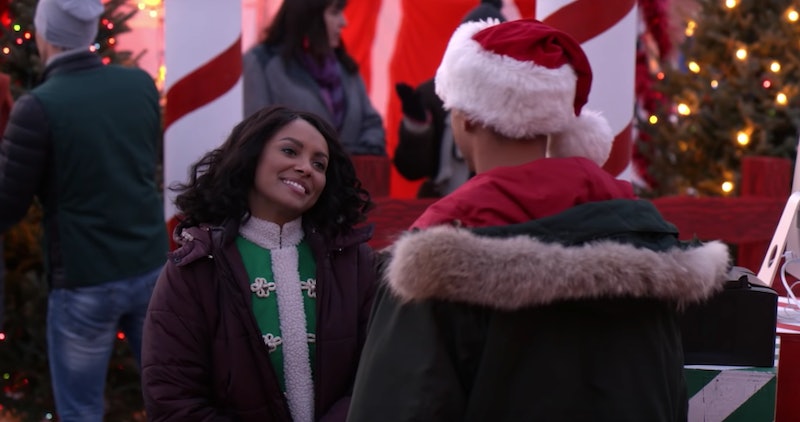 Ever considered bypassing the whole Santa Claus deal and submitting this year's Christmas wish-list to your advent calendar, instead? Not your average holiday tradition, that's for sure, but it's still the premise that takes center stage in the trailer for Netflix's new Christmas movie, The Holiday Calendar, which hit YouTube on Monday, Oct. 22. Suffice to say, judging by its extraordinarily sweet new preview, it looks like The Holiday Calendar is set on making everyone's wishes come true this holiday season.

"I didn't want to give you this in front of everyone," Grandpa Sutton (played by Ron Cephas Jones, who audiences might recognize as William from This Is Us) tells his granddaughter, Kat Graham's Abby, at the trailer's start. While Abby eyes her new pre-Christmas gift, Grandpa Sutton explains, "It's an antique advent calendar. It was your grandmother's. She wanted you to have it." As the trailer goes on to reveal, Abby, for her part, is pretty much up to her ears in Christmas. Her pseudo-photography job at the mall's Santa display means that Abby spends most days snapping pictures of kids on Santa's lap while wearing an elf costume.

"I've been too scared to leave my crappy day job," Abby tells Josh, an old family friend (who may or may not become more than just a friend to Abby over the course of the film, if the trailer's subtext is any indication), played by Quincy Brown. Continuing, Abby laments, "I want to be fearless enough to go after my dreams, like you."

Josh and Abby are both visual artists at heart, though it seems Josh is the only one who's been living up to his picture-taking potential out in the real world. As Abby is leafing through her personal photography portfolio, Josh presents her with a compelling question. "What would happen if you just went for it?" he asks. And while Abby doesn't seem totally averse to the idea of "just going for it," her response suggests she's not entirely convinced it's even possible. "I'd probably get some of these questions about my future answered," Abby replies with a smirk. In fact, that's kind of Abby's Christmas wish. (In addition to being her "regular wish," as she tells Josh in the trailer.)

As it turns out, Abby gets a little bit more help answering the whole "future" question than she might've originally imagined. Makes sense, since it looks like the extra assistance, to that end, comes from the likes of Grandpa's magical advent calendar. "Clearly, the calendar's magic," says Josh about mid-way through The Holiday Calendar's new trailer. How'd he come to that conclusion? Let's just say this particular advent calendar takes the traditional concept of daily gift-giving to an entirely new level. Understandably, the trailer leaves some details of the calendar's gift-giving magic to the imagination. What starts with a mysteriously perfect pair of boots rapidly gives way to a whole roster of big-time Christmas gifts, like a new photography gig and maybe even a new boyfriend.

Inquiring viewers will just have to hold out until The Holiday Calendar makes its way into Netflix queues everywhere just a little more than a week from now, on Nov. 2, to find out exactly how the Sutton's holiday magic plays out. But however Grandma Sutton's family heirloom ends up helping Abby draw a clearer path toward the future she wants for herself, it looks like The Holiday Calendar will prove a gift to audiences in and of itself.

So, does this mean we should consider submitting our wish lists to Netflix next year?

More like this
Everything To Know About Marvel’s 'Thor: Love And Thunder'
By Grace Wehniainen
Sadly, 'Fantastic Beasts: The Secrets Of Dumbledore' Isn’t Streaming — Yet
By Arya Roshanian
Laura Dern Said “Cultural Awareness” Made Her Rethink This 'Jurassic Park' Fact
By Grace Wehniainen
The 'Hocus Pocus' Sequel Finally Has A Release Date & It Makes Total Sense
By Shannon Barbour and Radhika Menon
Get Even More From Bustle — Sign Up For The Newsletter