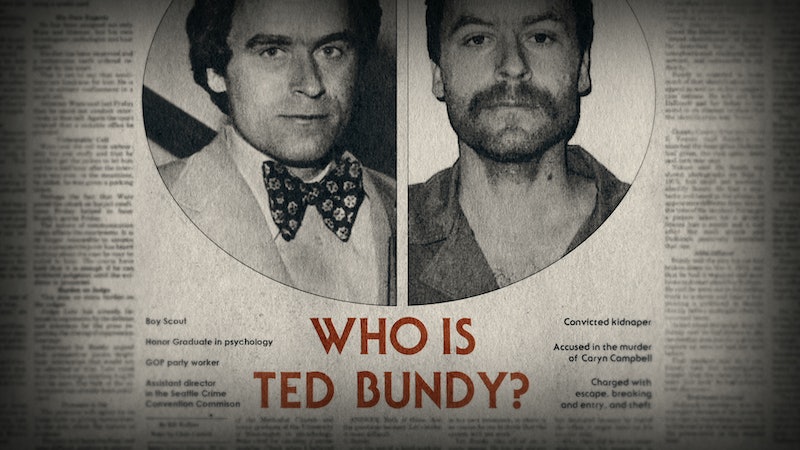 True crime fans will be gifted with more of the content they crave right at the beginning of the new year. Netflix is adding a Ted Bundy docuseries on Jan. 24, exactly 30 years after the execution of one of America’s most twisted and notorious serial killers. Conversations With A Killer: The Ted Bundy Tapes will be a four part series, featuring never-before heard audio from Bundy. The interview was recorded while he was on death row, after being convicted for the murder of at least 30 women.

The Ted Bundy Tapes comes from the Emmy-winning documentarian Joe Berlinger, and according to the Hollywood Reporter, will feature interviews with Bundy while he awaited execution in Florida. It will also cover the wild media frenzy around his case, including his scores of female admirers while he was in prison, and his marriage to Carol Ann Boone in the middle of his murder trial, where she testified on his behalf.

But you might be wondering: isn’t there a Ted Bundy film starring Zac Efron coming out next year? You’re right, and — surprise — the film, Extremely Wicked, Shockingly Evil and Vile, is also directed by Berlinger. Extremely Wicked will premiere at the Sundance Film Festival this coming year, which begins on January 24, the same day that the docuseries drops. But only lucky festival goers will get to see Zefron as the hot and terrifying Bundy in January; the rest of us will have to wait until the film hits theaters.

While Conversations With A Killer will focus on Bundy, Extremely Wicked, Shockingly Evil And Vile is told through a different lens. Michael Werwie wrote the film from the perspective of Bundy's longtime girlfriend, Elizabeth Kloepfer, who, according to Entertainment Weekly, "went years in denial of Ted’s crimes before she ultimately turned him in." Lily Collins will star as Liz alongside John Malkovich as Judge Edward Cowart, who ultimately sentenced Bundy to death in 1979.

One of the most terrifying things about Bundy was, of course, his looks and charm, which he used to his advantage when committing his murders. As reported by The New York Times, Bundy confessed in 1978 to murdering at least 30 women between 1974 and 1978 across seven states, though the true number of his victims is unknown, but presumed much higher. Which is why it makes total sense that people are feeling some type of scared way about Zefron in the movie: finding him super hot, which is an inappropriate way to feel about a serial killer. In that way, Efron is perfect for the role already.

If you want more Bundy facts, turn to the Bundy bible: Anne Rule's 1980 autobiographical work The Stranger Beside Me, in which she writes about working with and being friends with Bundy during his reign of terror. Reading about him from a woman's perspective will make you want to lock every door in your house, get under the covers, and watch a Netflix documentary about him. Conversations With A Killer: The Ted Bundy Tapes drops on January 24.