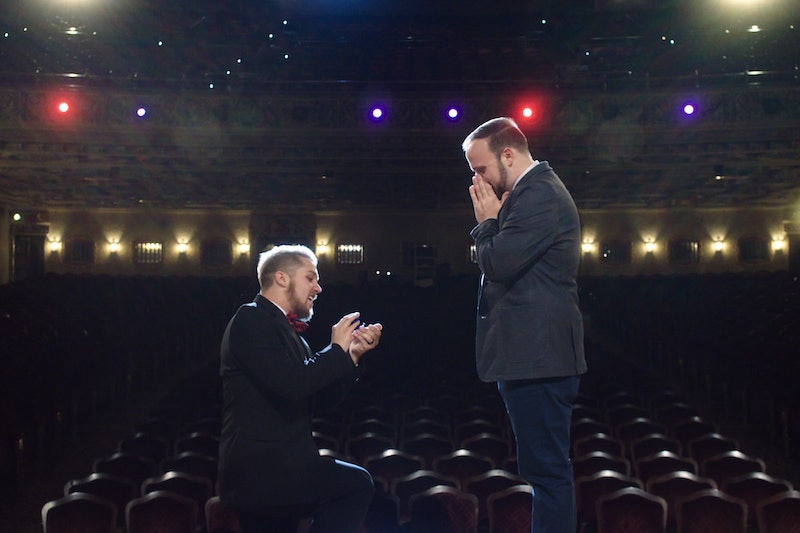 Cue the bridal march, because another wedding show is heading straight down the aisle and onto your television. Netflix's new Say I Do trailer dropped on Wednesday, June 17, and based on the clip, it's basically Queer Eye, but for weddings, which shouldn't be a surprise considering the show comes from Queer Eye creator David Collins. And yes, you'll probably cry watching it just as much as you do watching the Fab Five work their magic — if not more.

As detailed in a press release obtained by Bustle, each episode of Say I Do will focus on a different couple who always intended to marry but never got around to it for one reason or another. Cue interior designer Jeremiah Brent, fashion designer Thai Nguyen, and chef Gabriele Bertaccini (or the Fab Three, if you'd prefer), who are teaming up to help these deserving couples pull off the ultimate proposal and wedding — all in the span of one week.

The three experts will help each groom surprise their "spouse-to-be" with a personalized proposal, and then plan their dream ceremony for that same weekend. It sounds like pure chaos, but it's not all a race to the altar. Viewers will also get to know each couple along with the experts as they realize what's most important to them, and anyone even considering pressing play on Say I Do should probably have at least three tissue boxes on standby.

The three experts come from worlds usually not directly involved with wedding planning, but all of them are vital in ensuring these couples' special day go swimmingly. "Celebrities are wearing my designs on the red carpet, but there is something powerful when the bride puts on the wedding gown," Nguyen says in the trailer. "It's just pure magic."

Bertaccini explained that food has always made events "sentimental" for him. "It's all about creating a moment that you'll be able to look back to and smile," he said. "In this case, it's a surprise wedding." Brett, meanwhile, said his interior design skills are for more than just homes. "I may be small with weird hair, but I'm very effective," he joked.

Say I Do premieres on Netflix on July 1, in case you needed some wedding inspiration for, you know, when it's safe to have weddings again.