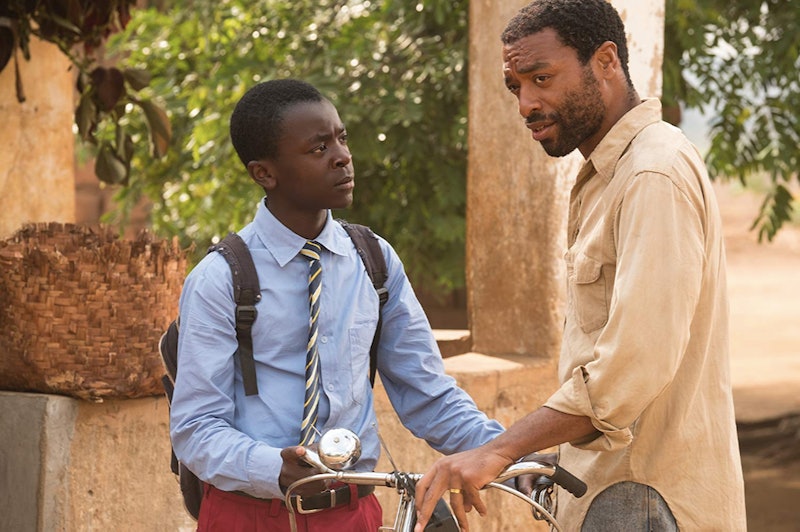 Oscar-nominated actor Chiwetel Ejiofor makes his directorial debut with The Boy Who Harnessed the Wind, an upcoming original Netflix movie, out Mar. 1. The story focuses on a Malawian boy named William (Maxwell Simba), who saves his town from famine by constructing a windmill to provide water and electricity. The Boy Who Harnessed the Wind is actually based on a remarkable true story, bringing a wider audience into William Kamkwamba’s incredible journey of innovation.

Back in 2007, Kamkwamba gave a TED Talk in Arusha, Tanzania, about how he accomplished this feat at only 14 years old. He explained that since he couldn’t afford his education, he dropped out of school. He found a book in the library called Using Energy that sparked the idea of creating the windmill. The book gave instructions of how to construct one, but Kamkwamba had to get creative with the materials he used.

“I used a bicycle frame, a pulley, and a plastic pipe,” explained the inventor, saying that it generated 12 watts of electricity. It was able to light four bulbs and two radios in his home. When that first windmill became a success, he began making more. He said his next plan was to create another one that would pump water and produce irrigation for crops, and that he hoped, through his TED Talk, people would be inspired to lend a hand and provide materials.

In an interview with Wall Street Journal from the same year, he discussed his accomplishments further, including building a windmill for a primary school, and even offering to help the local handyman properly build one. But the expansion of his efforts was in part thanks to his TED Talk. WSJ noted that after the TED Talk, entrepreneurs stepped up to finance his education, giving him the opportunity to go to African Bible College Christian Academy, an international school in Malawi’s capital, Lilongwe. He later went on to receive his college education at Dartmouth in the U.S., graduating with a bachelor’s degree in 2014, per Dartmouth’s newspaper.

In 2009, Kamkwamba co-wrote a memoir with the same title as the upcoming film, about the process of his invention and his journey to becoming a prolific inventor who made a huge impact on not just his town but his entire country. He also gave a second TED Talk, giving updates on his accomplishments. He joked that during the first one, he was too nervous to speak in depth about his work, but this time, he would explain why it was so necessary to create the windmill.

"One year, our fortune turned very bad. In 2001, we experienced an awful famine. Within five months, all Malawians began to starve to death. My family ate one meal per day, at night,” said Kamkwamba in the talk. He wanted to do something for his family and his country and stumbling upon the aforementioned textbook proved to be a life-changing experience, once he found out that windmills could provide the water needed for a successful harvest.

Kamkwamba’s story is incredible, showing how despite all odds, his determination drove him to find a solution that could be replicated by other communities. And in telling his story, Ejiofor is inspiring viewers to follow their own dreams and use them for the greater good.