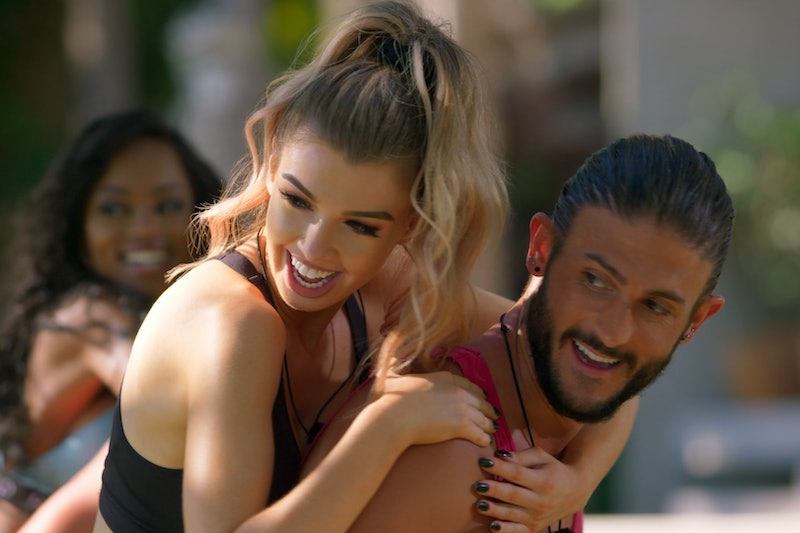 For anyone who can't stop binge-watching dating shows during quarantine, more content is on the way. On May 8, Netflix will premiere Too Hot To Handle Extra Hot: The Reunion, a special after-show hosted by narrator Desiree Burch. The virtual reunion will give fans the chance to catch up with favorite cast members, and, in a press release obtained by Bustle, Netflix promised the episode would include, "fresh updates, frisky banter and a series of spicy games." Sounds just hot enough.

Too Hot To Handle brought a cast of attractive singles to an island getaway under the pretense of meeting new people to date, attending beach parties, and relaxing at a resort. But there's a major twist — the cast are not allowed to engage in sexual activity, including kissing, during the duration of their stay on the island. Of course, as fans know, some of the hot singles were better at following the rules than others, which cost each contestant a chunk of the original $100,000 prize, and will probably be a hot topic of discussion during the reunion.

Were there any hookups that Lana, their robot chaperone, didn't catch? What happened to the couples who actually connected on the show? And, perhaps most importantly, what do they have to say now that they've watched the show for themselves? Hopefully these questions and more will be answered.

In April, Burch teased a potential reunion, and offered to host the event. "I would like to personally host the reunion very drunk and make them eat," she told Refinery 29. The comedian joked that she wanted the AI host to join for the conversation as well, saying, "I would love to see me and my air diffuser Lana together having a bit of a chat."

Cast members shared their excitement for the television event as well. On Monday, Bryce Hirschberg shared a photo from Too Hot To Handle on Instagram, writing, "REUNION THIS FRIDAY 5/8!!! - - name a better squad.. I’ll be wait.. (that’s rhymes)." Harry Jowsey also posted about the reunion episode on his Instagram Story, teasing, "I'm so nervous for this one, I was seating & shaking. You'll see why on Friday." Sounds like Harry is teasing something big.

It certainly sounds like Harry has something up his sleeve, and you can bet it involves Francesca. One thing's for sure: the Too Hot To Handle reunion is going to be full of surprises.