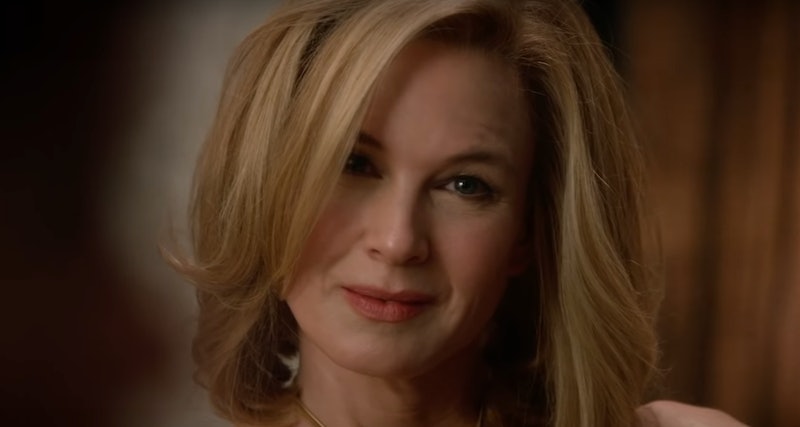 Are you ready for some drama with a capital "D"? Because it looks like that's exactly what you'll be getting in Netflix's trailer for What/If —  a new, neo-noir thriller limited series starring Renée Zellweger. Seriously you guys — it looks *so* juicy. And also kind of creepy? In a good way, though.

So, here's how the show is officially described on Netflix's website: "Desperate to secure funding for her med tech startup, an idealistic scientist (Jane Levy) and her husband (Blake Jenner) strike an outrageous deal with a mysterious investor (Zellweger)."

Now, while this description doesn't exactly evoke shock and awe in and of itself, the new trailer for What/If paints a much, much darker picture. The clip opens with Zellweger breezing on to her balcony, soaking up the thunder and lightning storm that brews on the city's horizon.

"If you want a life of purpose," she says in a voiceover, "begin by inverting the notion that everything happens for a reason." Wait, so, does that mean something along the lines of, like, "nothing happens by chance?"

Viewers then get a quick glimpse of a cover of a book by Zellweger's character, Anne Montgomery, who is the apparent "voice of the investment revolution." Montgomery's book is titled At Any Cost: Women, Money, and Getting What You're Worth, and it quickly becomes clear that the cost, in this case, is pretty wild.

Over the course of the next few minutes, there are flashes of normalcy, mixed in with lots of seemingly devious — or, at least, questionable —  behavior. "All your efforts," Montegomery explains, "personal, professional, carnal ... You must be willing to make the hard choices. Do the unpleasant things. Risk your most valuable assets. Because nothing worthwhile is ever achieved without sacrifice."

Montgomery then gets down to the nitty-gritty. "Now that you're on the brink of greatness," she says, addressing Levy's character, "are there still limitations to what you'd be willing to sacrifice? In this case, a night alone with your husband."

Ah, yes. An indecent proposal, as they say. "Would that be an acceptable condition of a firm offer to finance your company?" Montgomery asks. For now, the couple's answer remains unclear.

What does become clear, however, is that Montgomery's proposal may have more implications than it appears on the surface. Not that Levy's character allowing her husband to sleep with the mogul isn't a big deal — it definitely is. The fall-out of them agreeing to her proposal seems like it has the potential to be much more distressing, though.

At the end of the trailer, viewers are left with a few more words of Montgomery's duplicitous advice: "True success comes at any cost," she hisses. So dark. So foreboding. So very marathon-worthy already, and all we've gotten is a two-and-a-half minute trailer. It legit looks that good.

You won't have to wait long to indulge in the many sins previewed in the clips. What/If hits Netflix on May 24, and it looks positively addictive.