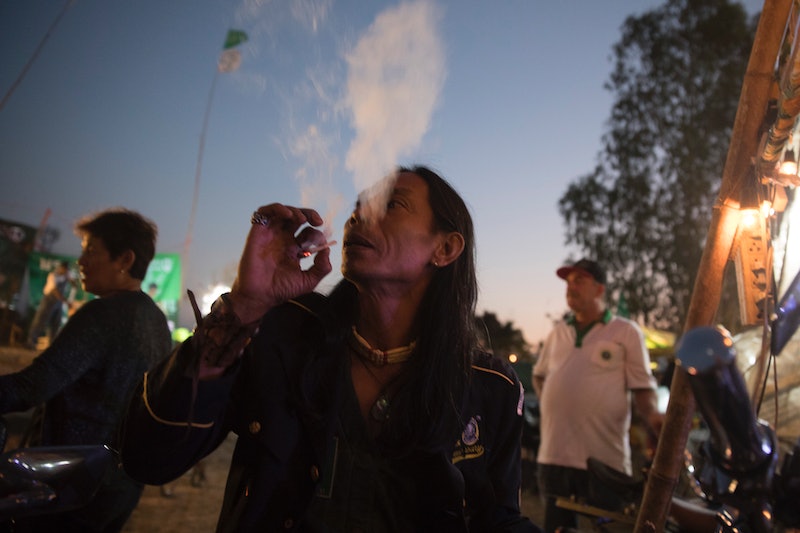 The governor of Nevada has signed a new marijuana law that could have big ramifications for people seeking employment in the Silver State, CNN reports. Under Nevada's new weed law, most employers won't be allowed to reject job applicants for testing positive for marijuana use during the screening process.

The new law, which takes effect in 2020, doesn't ban employers from giving drug tests to applicants before hiring them. However, it does prohibit employers from rejecting applicants on the grounds that they tested positive for marijuana. Additionally, if a business requires new hires to undergo a drug screening test within their first 30 days of employment, the new law gives those workers the right to submit additional drug test results to their employer "to rebut the results of the initial screening," and requires the job in question to "accept and give appropriate consideration" to the new test results.

Several occupations are exempt from the new requirements, however. It will still be legal to reject prospective firefighters and emergency medical technicians for having smoked weed, and the same goes for jobs requiring the operation of motor vehicles. Additionally, the new law also has a carveout for people applying to jobs for which smoking marijuana, "in the determination of the employer, could adversely affect the safety of others." According to ABC News, these provisions were added at the behest of the Nevada Trucker's Association.

Lastly, as VICE notes, the new legislation won't apply to workers operating under collective bargaining agreements — that is, union workers. Madisen Saglibene, executive director of the Nevada and Las Vegas chapters of NORML, told VICE that this carveout was added at the behest of unions because if it wasn't, union workers might have a harder time getting insured, which in turn could prevent them from collecting workers' compensation in the event of an injury or accident.

"They don't want to put their employees at risk," Saglibene said of the unions' position on the bill.

Nevada, which legalized recreational marijuana in 2016, is the first state to pass legislation banning employers from rejecting applicants for testing positive for marijuana use.

"As our legal cannabis industry continues to flourish, it’s important to ensure that the door of economic opportunity remains open for all Nevadans," Gov. Steve Sisolak, a Democrat elected in 2018, said in a statement. "That’s why I was proud to sign AB 132 into law, which contains common-sense exceptions for public safety and transportation professionals."

The legislation was proposed by Nevada Assemblywoman Dina Neal, ABC News reports. Although she had opposed legalizing recreational marijuana years earlier, Neal said that she felt Nevada "needed to have a policy to deal with it because we had a significant amount of people using on the weekends."

"I hope that employers actually try to not discriminate against recreational users because once we made it lawful through the ballot, the ballot question said it needed to be treated the same as alcohol," Neal said, according to ABC News.

Blaze Linn, an employee at a cannabis museum in Las Vegas, argued that the new law may even incentivize more people to apply for jobs that they otherwise wouldn't have.

“I know for some people, seeing that [prospective employers] drug test is a deterrent for even applying to that job, because they smoke weed and they don’t want to risk being denied,” Linn told KSNV.

The law only affects marijuana testing, and doesn't prohibit employers from denying applicants who test positive for other drugs.