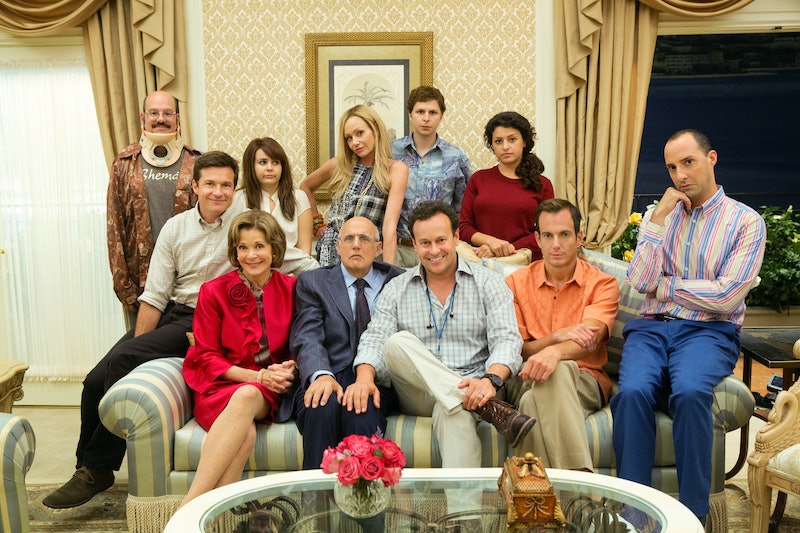 To all the ardent Arrested Development fans who never stopped hoping that their beloved Bluth family might not really be gone for good, this latest bout of news will probably have you doing the chicken dance like there's no tomorrow. Per Tuesday, May 1's release of an unexpected announcement by the show's creator, Mitch Hurwitz, Arrested Development Season 5 is coming and Season 4 will be re-released on Netflix — as a remix.

According to Hurwitz's announcement (which he released in letter format via the show's Facebook and Twitter accounts early Tuesday afternoon, May 1), the revamped fourth season is slated to careen into Netflix queues everywhere in just a matter of days, on Friday, May 4. And not only that, Hurwitz additionally confirmed in the letter that progress on Arrested Development's Season 5 is well underway and will also see its own Netflix release sometime soon.

"I'm writing you [...] with TWO exciting updates about Netflix and the series. The first is that a new fifth season of Arrested Development will be coming back to Netflix soon. Like real soon. Like, if you knew when, you would not be wrong to be thinking 'why are we all just hearing this now?'"

And, while he doesn't reveal the specifics regarding exactly when Arrested Development's fifth season is slated for release, Hurwitz's letter goes on to say that the date of its upcoming Netflix premiere "will be announced shortly." Revealing the second "exciting update" about what's on the horizon for Arrested Development fans who've waited years for a Bluth family return, Hurwitz wrote,

"This Friday, on a premature holiday the Bluth family know [sic] as 'Cinco de Cuatro,' Netflix will be releasing a remix of season 4 of Arrested Development that I recently put together."

Penning the latter half of the announcement letter, Hurwitz went on to reveal that the upcoming remix — officially titled Arrested Development Season 4 Remix: Fateful Consequences — was borne out of a complicated-sounding process of shifting and re-cutting, wherein Hurwitz essentially redistributed the content from Season 4's original 15 episodes to craft a newly-minted 22-episode season. As Arrested Development fans will probably remember, Season 4's original narrative structure was such that each respective episode focused entirely on one individual character.

In the letter, Hurwitz said he originally began "shuffling the content from 15 individualized stories into 22 interwoven stories" as a sort of double-sided "experiment." On one hand, Hurwitz explained in the letter, crafting the revamped season was partly an experiment to see if he "could make some money" with a future syndicate opportunity (like this one, conceivably). On the other, Hurwitz also told fans that the remix endeavor was partly an experiment in comedic innovation, "to see if new jokes and a new perspective would emerge from a remix that features all the Bluths in every episode."

Hurwitz finished the letter by telling fans that he's "really excited" about how the remix turned out. And, judging by the influx of feverish responses to the news of Arrested Development's upcoming content rollout on Twitter, it seems pretty safe to say fans of the show are really excited, too. Like, really excited.

Naturally, in paying homage to the wily quirks of Arrested Development's beloved cast of goofy characters, a few fans on Twitter celebrated the news with — that's right — the chicken dance. "Currently doing the chicken dance of excitement," one user tweeted, accompanying a GIF of the Bluth family's now-famed boogie-woogie routine.

Another fan on Twitter was apparently also indulging in some chicken-dancing of their own — albeit, of an arguably less Bluth-like variety. "This is my chicken dance," the fan tweeted, captioning a GIF that features a headset-clad woman dancing pretty vigorously. And, while the GIF in question certainly captured that particular user's enthusiasm regarding the news, Arrested Development's Twitter account was quick to poke fun (albeit, ostensibly good-natured fun) at the fan's choice of media. Replying to the fan's comment, the account quipped, "You definitely have never seen a chicken."

That being said, whatever your chicken dance looks like, feel free to continue happily partaking in it. After all, Arrested Development fans have been waiting for an announcement like this one for quite some time now, so there's certainly more than cause for celebration.