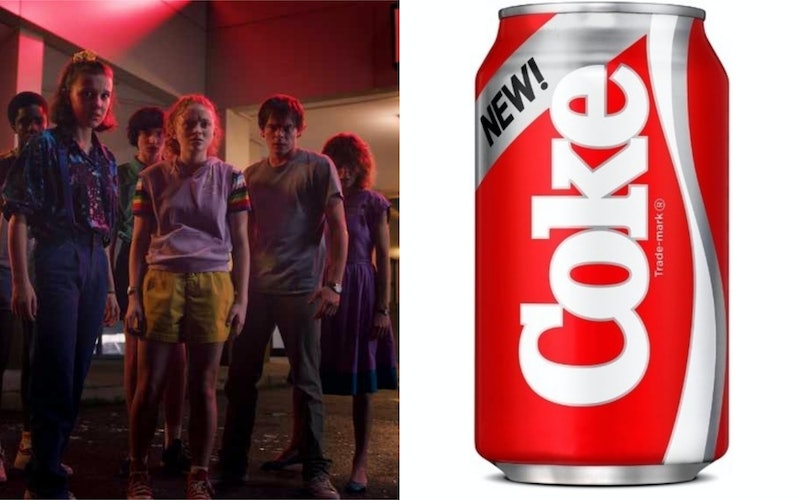 As the return of Stranger Things is looming, fans have a lot to get excited about. Of course there's the story, the special effects, the characters — but darn if it isn't the huge hit of nostalgia that really ties it all together. Stranger Things is all about the '80s — which is why the show has teamed up with Coca-Cola for a New Coke and Stranger Things extravaganza. Not only will the drink be featured on the show, but you'll be able to get your hands on some New Coke of your very own.

Now, you might not remember New Coke — a variation of Coke that made a debut in 1985, when the third series of the show is set. New Coke didn't last long, as fans demanded a change to the original recipe, but it definitely is perfect fodder for a pop culture moment.

“One thing that makes Stranger Things so special is its commitment to authentically portraying the decade in which the show takes place,” Stuart Kronauge, president, sparkling business unit, Coca-Cola North America, explained on the company's website. (Also, can we all stop for a second and enjoy the fact that he works for the "sparkling business unit"?) “When we heard that Season 3 would be set in the summer of 1985 and they wanted to integrate New Coke, we knew we had an opportunity to revisit that time period in a fun and unexpected way that would also allow us to be part of one of this year’s most anticipated pop culture moments.”

If you want to get a taste of that sweet, sweet recipe that everybody... didn't like... then this is your first chance in decades to get your hands on some. It's a bold move for the company but, let's be honest, wouldn't a chance to team up with Stranger Things make you think outside of the box a little bit?

“Ultimately, we looked around the room and said, ‘Why wouldn’t we do this?’” Oana Vlad, director of Coca-Cola Trademark, Coca-Cola North America, said on the company's website. “No one would have ever thought we’d produce New Coke again after what happened in 1985, but we all agreed that if we wanted to partner with Netflix and Stranger Things in a truly culturally relevant way that would resonate with our fans — and theirs — then we had to make the New Coke story come to life.”

But that's not the only Stranger Things mashup they have on the radar. There will also be Stranger Things-inspired cans of good old Coke on sale from June, featuring the original 1985 design with “Enjoy Coke” and the Stranger Things logo. So there are plenty of ways to get your Coke fix while supporting your favorite show.

I don't think that New Coke is going to be making a permanent comeback anytime soon — because it did not go down well the first time — but it's interesting to see TV and real life overlap so spectacularly. And hey, trying New Coke might be the closest any of us ever get to the Stranger Things universe, so you may want to act fast.