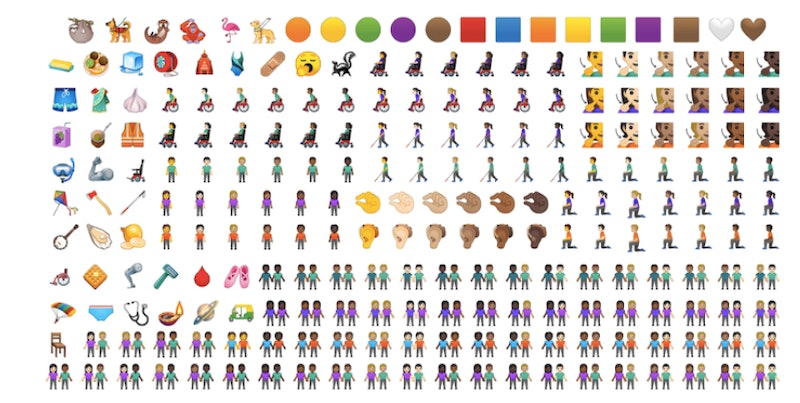 July 17 is a celebratory day for the technology community and anyone who can't get enough of one of its most expressive innovations. On this year's World Emoji Day, new emojis for 2019 were unveiled — and though you can't use them just yet, they'll be released at later points this year. The latest emojis, which inevitably include new types of foods and animals, also follow an overarching theme: inclusivity.

As Engadget explained, new emojis are determined and approved by the nonprofit Unicode Consortium every year. The organization announced back in February that 59 new base emojis, with 230 different skin tone and gender varieties, would become available this year, many of which were focused on inclusivity. The outlet noted that Apple and Google subsequently adapted these emojis for their own platforms. And on Wednesday, the companies provided users with a glimpse of their designs in honor of World Emoji Day.

As Apple reported via its online newsroom, the company's new inclusive emojis feature many that are focused on disabilities. They include an ear containing a hearing aid, a guide dog, various wheelchairs, and leg and arm prostheses. The company also noted that its new emojis will include different varieties of the hand holding emoji that allows people to choose up to 75 different combinations of skin tone and gender.

For its part, Google is similarly releasing a variety of disability inclusivity-themed emojis, according to a July 17 company blog. Like Apple, it will also allow users to create up to 71 different combinations of hand holding couples using a variety of gender and skin tone choices. Moreover, the company also specified that it plans to focus on gender inclusivity by making gender neutral individuals the default for certain emojis.

"We’re supporting 53 emojis with gender inclusive designs. For example, the emoji for 'police officer' is commonly displayed as male and 'person getting haircut' is female," Jennifer Daniel, Google's Creative Director of Emoji, explained on the company's blog. "These kinds of design decisions can reinforce gender stereotypes so with this update, emojis that don’t specify gender will default to a gender-ambiguous design."

The National Organization on Disability (NOD) praised the new emojis' inclusive nature and said that it hopes they will help encourage disability inclusivity in the workplace. “These new emojis will enable one billion people with disabilities around the world to more fully and authentically express themselves,” NOD’s director of external affairs, Priyanka Ghosh, said to NBC News. “Perhaps corporate America can also seize upon these new icons to embed disability seamlessly into their everyday lexicons, enabling employees to better communicate with each other and build more disability-inclusive cultures.”

In addition to the many inclusive emojis, both companies will also be releasing several other new emojis. According to Gadgets 360, these include a yawning face, a waffle, falafel, garlic, a sloth, and a skunk, among others.

Apple's new emojis will be available this autumn in a software update for iPhone, iPad, Mac and Apple Watch devices, the company noted. Google reported that users will be able to access its new emojis when they are released with the Android Q, the company's latest mobile operating system, later this year.