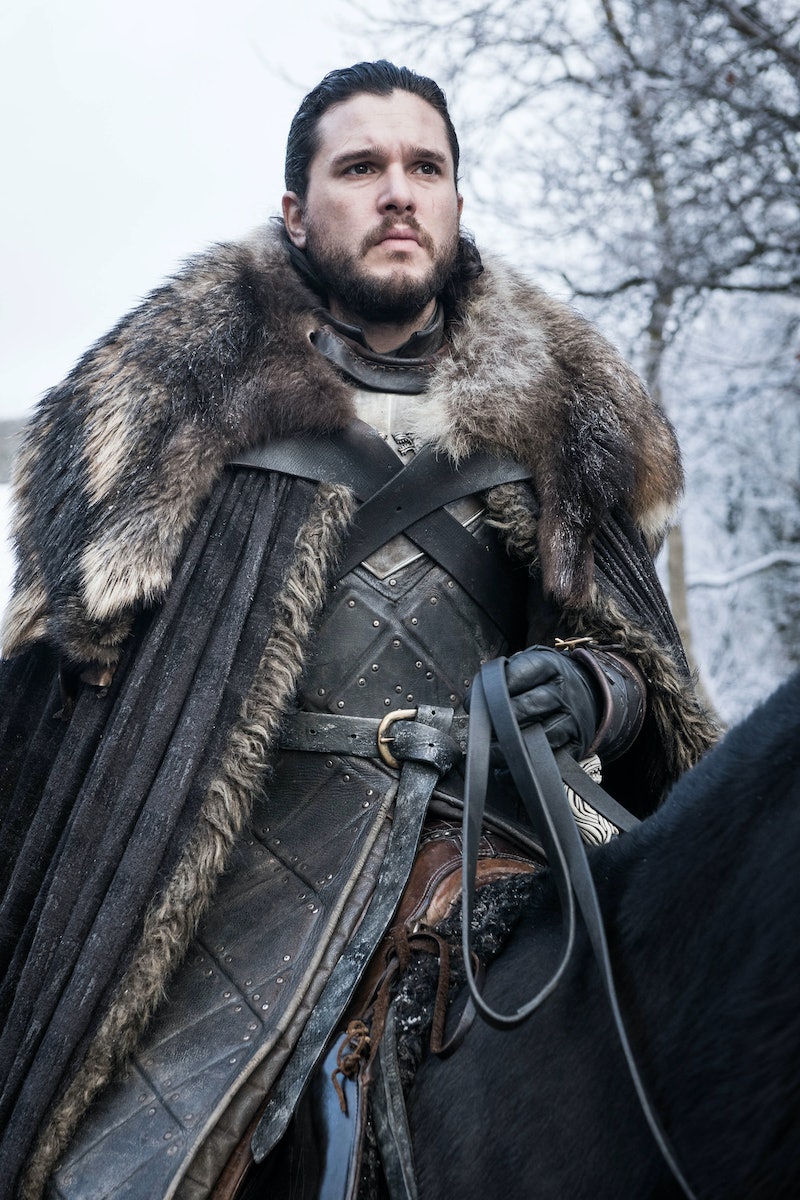 Jon Snow may be on the verge of learning who his real parents are on Game of Thrones, but that isn't the only shocking discovery he's going to make when he arrives back to Winterfell. Shortly after he left, Arya showed up and proved to Sansa that she's no longer the young, innocent sister she once knew — something the King in the North will also get to witness firsthand when the series returns. Newly released footage of Season 8 seems to confirm that Arya and Jon will reunite on Game of Thrones and, as you can imagine, fans can hardly contain their excitement.

Jon and Arya haven't shared screen time together since the early episodes of Season 1, just before Jon left to join the Night's Watch and Arya set off to accompany her father and Sansa to King's Landing. Little did they know of the dangers that awaited them in the future, though, they did share a very touching goodbye, which included Jon gifting Arya with her tiny sword, Needle. A lot has happened since that moment in time, so rest assured that their reunion will prove to be somewhat bittersweet. On the one hand, seeing each other is sure to bring back a rush of happy memories and the love they share for each other. But at the same time, Jon is going to be in for a shocking wake up call to see the fierce assassin his not-so-little sister has become.

How he will handle that realization remains to be seen, but if you look closely at the grainy footage below, you see that these two do, indeed, find their way back to one another in Winterfell.

But just in case that alone isn't enough to get you pumped for the show's return on April 14, another clip showed Tyrion giving one of his famous speeches in Winterfell with Dany and Sansa listening intently behind him at the main table in the Great Hall. Will it be enough to boost morale as the dead march on their doorstep? We'll just have to wait and see, but if anyone can deliver an inspirational monologue it's Tyrion.

The new Game of Thrones promos were released by HBO on Sunday night ahead of the Veep premiere and a new episode of Last Week Tonight. And while the network has yet to post the videos online, that hasn't stopped fans from taking it upon themselves to provide video evidence to the masses on their own. And the general consensus is that we are so not ready for what this will do to our emotions.

Naturally, there will be a lot for fans to look forward to when Season 8 debuts. The Battle of Winterfell will be epic and heartbreaking and magnificent and devastating all at the same time. But no matter what happens and which characters are unable to survive, at least we'll have this special moment to enjoy. Jon and Arya will definitely reunite. Perhaps Winterfell has a fighting chance in this war after all.