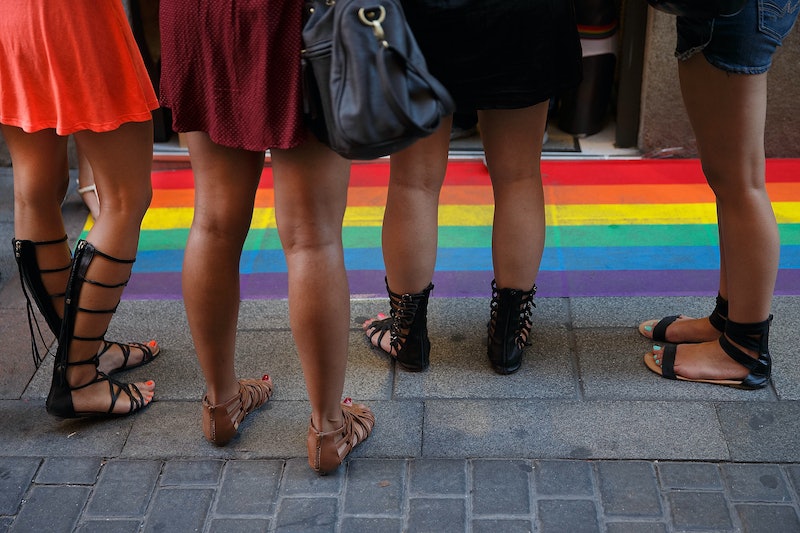 Legislation signed into law Thursday stands to make classrooms in the Garden State a bit more inclusive. New Jersey has approved LGBTQ-inclusive school curriculum, meaning students in the state will now learn about the political, economic, and social contributions of LGBTQ individuals in the classroom. Signed into law by New Jersey Gov. Phil Murphy, the bill has been hailed as a step toward greater equality and inclusion in the classroom. But despite the bill's potential to increase representation for marginalized groups, New Jersey is only the second state in the country to have required schools introduce such LGBTQ-inclusive curriculum.

LGBTQ advocacy groups have hailed the new law as a victory for equality. "It's critical that our classrooms highlight the achievements of LGBTQ people throughout history," Christian Fuscarino, executive director of the statewide LGBTQ advocacy and education group Garden State Equality, said in a statement. "Our youth deserve to see how diverse American history truly is — and how they can be a part of it one day, too."

State lawmakers have also hailed the new law as an opportunity to encourage and teach tolerance. A spokesperson for Gov. Murphy told the Huffington Post that the governor was "honored" to have signed the bill into law. "The Governor believes that ensuring students learn about diverse histories will help build more tolerant communities and strengthen educational outcomes," the aide said, noting that both LGBTQ individuals and persons with disabilities had "rich contributions and accomplishments."

One of the bill's co-sponsors, New Jersey Assemblywoman Valerie Huttle, also praised the new law's potential for building tolerance at a young age. "It is my hope that with this legislation signed into law we can foster new generations of students that understand the importance of tolerance and equality," she said in a tweeted statement.

The bill, which is set to take effect immediately, requires each board of education in the state to provide middle school and high school students "instruction on the political, economic, and social contributions of persons with disabilities and lesbian, gay, bisexual, and transgender people." Such instruction will be considered part of the district's implementation of the required Social Studies Core Curriculum Content Standards. The bill also allows for a board of education to adopt instructional materials that "accurately portray the cultural and economic diversity of society" by including the contributions of persons with disabilities and LGBTQ individuals, two groups largely underrepresented in school's social sciences curriculum.

On Thursday, Murphy also signed into law a bill that requires all school districts in the state to "incorporate instruction in grades six through 12 on law and [the] meaning of consent for physical contact and sexual activity" in an attempt to curb sexual assault and harassment. "Ending sexual harassment and assault is currently a part of the national conversation, and taking steps to begin that conversation at an earlier point in a student's school career will advance the goal of ending sexual violence and ensure that students are well prepared to protect themselves and ensure the safety of others when they first arrive on a college campus," the bill's text reads. That bill will not take effect until the beginning of the 2019-2020 school year.