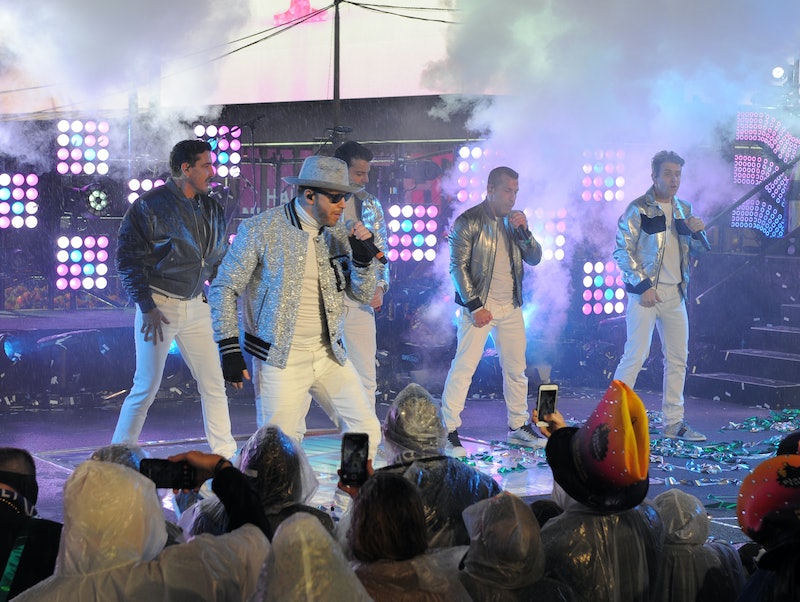 Times Square turned into a block party for its NYE festivities. '80s boy band New Kids on the Block performed at ABC's Dick Clark's New Year's Rockin' Eve with Ryan Seacrest, which took place Monday, Dec. 31. The Kids performed a medley of their hit songs, including "Step By Step" and "The Right Stuff." And while audiences were excited to see the boy band reunite, many fans were concerned about the rain, which has been pouring down all afternoon. Twitter drew attention to at least one camera lens, which was so covered in raindrops that it was difficult for audiences to see the band's reunion performance.

The program's hosts, Ryan Seacrest and Jenny McCarthy, commented several times on the torrential weather, which was nevertheless a welcome change from last year's frigid temperatures. Both the New Year's Rockin' Eve hosts, as well as their Times Square audience, looked soaked and miserable as they waited to watch the ball drop at midnight. In fact, according to New York channel ABC 7, the Times Square crowd wasn't allowed to use umbrellas. For that reason, audiences were wearing ponchos (not to mention why Seacrest's hair and face were likely so drenched).

Fortunately, they didn't have to dance in the rainy weather (except Seacrest, who did unfortunately try to floss later in the program). However, the show had to go on, and New Kids on the Block (NKOTB) performed as scheduled, singing a variety of their greatest hits. And they weren't just standing in place, either. The five men were dancing, climbing stairs, and running to greet the crowd. And while the performance itself was successful, the rain had gathered on at least one of the camera lenses, making it difficult to see what was happening in Times Square.

However, it wasn't just the raindrop-covered camera that audiences were concerned about. Part of the NKOTB performance involved dancing up and down slippery steps, and many people were naturally concerned that someone would fall (thankfully, no one did). The boy band — which is made up of Donnie Wahlberg (Jenny McCarthy's husband), Jordan and Jonathan Knight, Joey McIntyre, and Danny Wood — performed well despite the slick surfaces, and nary a new kid fell off the block (so to speak). But with such a slick stage paired with choreographed dance moves, a band member could have easily taken a tumble.

However, New Kids on the Block weren't the only ones to sing live in Times Square — musicians like Bastille and Dan + Shay also braved the precipitation, performing admirably despite the tricky weather conditions.

What's more, this isn't the first time NKOTB have reunited for a NYE performance. The men joined forces with the Backstreet Boys back in January 2011 for a medley. Furthermore, blockheads will be psyched to learn that NKOTB will be touring in 2019 with The Mixtape Tour, starting up in early May. So even if fans missed the group's New Year's Eve performance, they'll have another opportunity to catch the Kids make their comeback. Hopefully the rain will hold off in the future.