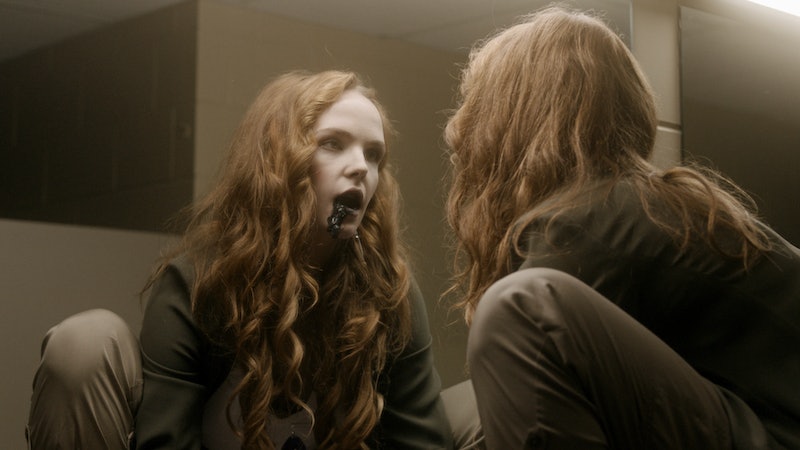 Fall is (almost) upon us, which means it's time for Halloween season to begin. And to celebrate, Netflix is premiering a lot of new, freaky content, guaranteed to have you shivering in fear on your couch. In fact, the new Netflix Halloween movies and TV shows will give a whole new meaning to "Netflix and Chill." Netflix announced their "Netflix & Chills" schedule on Friday, Sept. 13, in celebration of the auspicious day. And, while some Netflix users might still be hanging onto the remains of summer, all this new Halloween-themed content will make even the most reluctant person eager for fall.

To keep up with the theme, Netflix is releasing a handful of new original horror content. Following on the heels of It Chapter Two's success, Netflix will premiere a new Stephen King adaptation, In the Tall Grass, on Oct. 4. Of course, the streaming service will also be premiering a few original shows guaranteed to keep you on the edge of your seat, including Marianne, a series about a horror novelist who learns that a demon she wrote about is actually alive — and it wants her to keep writing.

On the lighter side, Netflix's Halloween lineup will also feature the premiere of Prank Encounters, the prank show from Stranger Things star Gaten Matarazzo, as well as Halloween-themed Captain Underpants special for the kids. Here are some of the creepier original offerings coming this fall.

First on Netflix's Fall list is Marianne, a French show about a novelist, haunted by a spirit named Marianne. Netflix's official description teases: "This malevolent spirit named Marianne draws her [the novelist] home and insists she continues writing... or else." Based on the trailer, fans can expect a sort of Haunting of Hill House horror vibe, including ghosts and jump scares.

For those less into jump scares and more into psychological thrillers, look no further than In the Shadow of the Moon. The film takes place in 1988, when a police officer starts tracking a serial killer who strikes every nine years, only to become obsessed with the case to the point of madness.

If It Chapter Two has got you in the mood for more of Stephen King's creepy tales, In the Tall Grass should give you all of the frights you crave. Like that famous story, this film centers around kids — siblings Becky and Cal — who become ensnared by a sinister, mysterious force that pulls them apart and pits them against one another after they rush into the tall grass in order to attempt to rescue a lost boy in distress.

The creepy kids' series is back for Season 2, with 10 more spine-tingling tales about sinister apps, portals to different dimensions and lessons about being careful what you wish for. Think Are You Afraid of the Dark? but with a modern, mysterious twist.

Starring Sam Worthington, Fractured centers around Ray, who stops at a rest stop with his wife and daughter on a road trip, only for them to get into an accident and be sent to the hospital. However, while they're being treated, the pair — and all evidence that they ever existed — disappear, leaving a distraught Ray to attempt to find his family and discover what happened to them.

Did Stranger Things leave you wanting more of Sadie Sink? You'll want to watch Eli, which should give you the right amount of Sink and scares. The film tells the story of a Eli (Charlie Shotwell), a young boy, who lives completely isolated from the world thanks to a mysterious, debilitating illness. However, after he moves in with a doctor to undergo a radical new treatment, it seems like his time in the new house could offer more of a curse than a cure.

Being in high school is hard — being a high schooler in the middle of a brand new, post-apocalyptic world is downright terrifying. After a nuclear blast wipes out most of California, several groups of high school cliques fight for survival in their ravaged hometown in this genre-bending original series.

Now that we've all finally recovered from Bird Box, Netflix has another psychological horror film about a mother doing whatever it takes to save her child. Carmen Ejogo stars as Katrina, who's daughter is bitten by a rattlesnake in the desert, and turns to a mysterious woman for help. In exchange for saving her daughter's life, however, the woman wants Katrina to kill a stranger before sundown, or else the snake bite's poison will once again take effect.

For those who like their Halloween tricks a little less spooky and a little more silly, Stranger Things star Gaten Matarazzo's new prank show should add some levity to the month of October. Described as "the most elaborate hidden camera prank show ever," Prank Encounters gets two complete strangers to compete against one another in a series of tasks, before their paths collide and they begin facing off against the supernatural. What else would you expect from Dustin?

And here's all the new Halloween content coming to Netflix and Chills.

Chills, thrills, and spooky stories for the whole family — it looks like the streaming service's new "Netflix & Chills" lives up to its name, and will keep everyone on the edge of their seats, all through this Halloween season. Just remember to keep the lights on during your horror marathons.