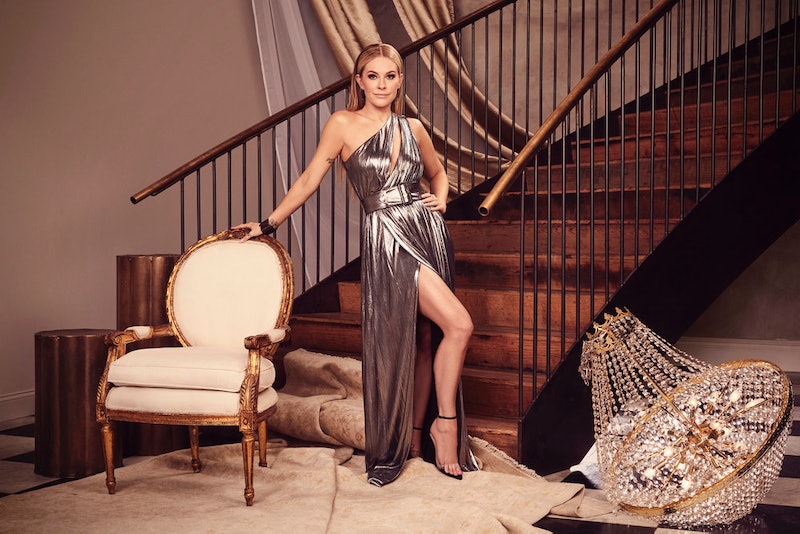 Bethenny Frankel is out, so Leah McSweeney is in on Real Housewives of New York and longtime fans won't be disappointed with the addition. The RHONY star may be new to the show, but she's a lifetime New Yorker with a personality to match. She's bold, unafraid to speak her mind, and fiercely protective of the things she loves like her daughter Kiki and her friend Tinsley Mortimer.

Tinsley was actually Leah's in to the group, and Leah only just met the rest of the women for the first time this season. In an interview with Bustle, Leah says that her relationship with the cast will be a roller coaster. "Right now at this moment, I love all the women," she says. "It wasn't like that throughout the season and it probably won't be like that once I watch all the episodes, but right now we are in a very good place and they all have a very special place in my heart."

Leah tells Bustle that she was a fan of the show and had watched before joining, but that nothing could have prepared her for actually being on it. "There’s no explaining what the experience is like, and I've described it like when I try to tell my pregnant friends what childbirth is going to feel like," she says. "You don't know until you're actually there giving birth. So that's how I felt about doing the show. I can't even explain what it's like, you can't do any justice."

Even if the RHONY cast or fans didn't know Leah's name until now, they may know her streetwear brand Married to the Mob. According to her Bravo bio, the fashion designer launched the brand in 2004, and it's still going strong today. In addition to the line, Leah co-hosts a podcast called Improper Etiquette, which describes itself as "witty, sexy and unapologetic" — much like the co-host herself. She's willing to talk about "taboo" subjects and give her opinion — even where others may not feel it's needed.

She put all of herself out there, she adds. "I feel like I wear my heart on my sleeve and I put myself out there, and I think if you watch the show you won’t have any misconceptions, because I’m just being me," Leah says. That's what makes her a great Real Housewife. It's also why she won't necessarily be letting her 12-year-old daughter watch the show.

Kiki, who has some scenes in the series, was fully supportive of her mom joining the cast. "She was like, 'Oh mom, you're perfect, you’re so dramatic all the time,'" Leah tells Bustle. Still, she adds that she probably won't be tuning in with her daughter on Thursday nights. "There are things that are on there I don’t want her seeing. Like she doesn’t need to hear me talking about sex, she’ll be so grossed out," she says with a laugh.

It's easy to see from the first episode alone that Leah and Kiki have a special relationship. Leah and Kiki's father Rob split when Kiki was 2, so Leah's been a single mom for most of her daughter's life. However, she says in the first episode that Rob remains a big part of their life. They co-parent closely together and consider each other best friends.

Now Leah will have a chance to make some new friends with the rest of the RHONY ladies, although her Bravo bio cautions that "her outspoken nature proves to be too much for the ladies to handle at times." Plus, her tagline is, "I may float like a butterfly but I sting like a b*tch," so she's certainly not one to trifle with. Few born-and-bred New Yorkers are.