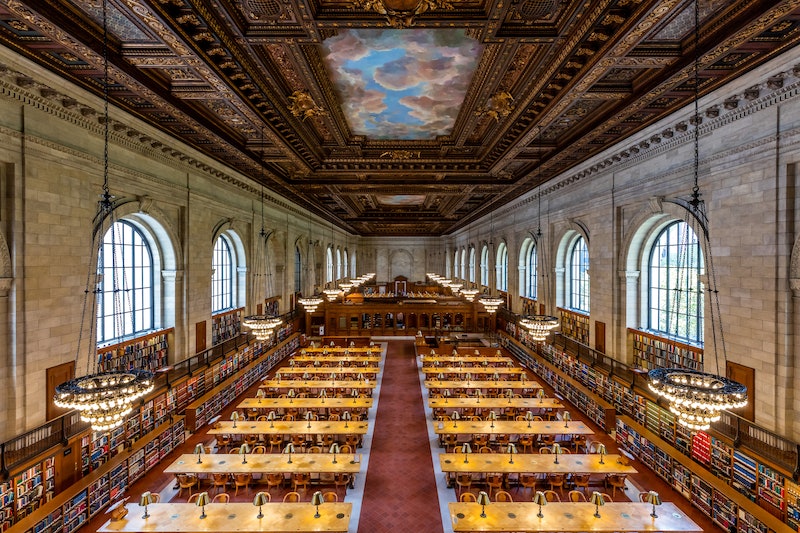 With its prideful lions and decadent Beaux-Arts beauty, it’s easy to identify The New York Public Library as the library of New York City. While the grandiosity of the NYPL system cannot be denied, it is far from the sole library system linking the city’s 8.6 million people to higher learning and expanded knowledge. While the Bronx and Staten Island are served by New York Public Library, Queens and Brooklyn have their own separate public libraries, and it turns out these three systems are involved in a sibling rivalry of sorts.

This isn’t a "ruin Christmas and spend years ignoring one another’s existence" type of sibling rivalry. The librarians of New York prefer to view it as a competitive collaboration. According to the New York librarians we spoke with, it's akin to the itch that pushed you to study harder after seeing your sister’s straight-A report card.

“The way I kind of always described them is if you’ve got the three libraries, you’ve got three sisters, like in a fairytale. New York Public is the oldest. She’s elegant, and graceful, and beautiful, and everyone wants to be her or be with her," says Christian Zabriskie, the executive director of Urban Librarians Unite and library administrator for the Yonkers Public Library. "Then you have Brooklyn Public, and she’s kind of the youngest, and she’s artsy, and creative, and fun, and funky and very into techy stuff. Then you’ve got Queens. And Queens is probably just working a couple of jobs and trying to keep her head above water, but is doing the best she can with what she’s got, and that’s kind of how I always thought of it.”

Zabriskie isn't saying Queens lacks staff or financial resources; rather, he is alluding to the "working class hero" aspect of the Queens library, which he describes as hyper-focused on street level librarianship. He has worked in libraries — including the Queens system, which he left in 2016 — for 20 years and has seen this friendly competition unfold first-hand. To him, although the librarians generally harbor no animosity toward the other systems, each wants what the other two have, whether it’s a shiny new reading program or a strategy to increase the number of library cards. Other librarians echo this view, and explain it's born out of the motivation to provide the best of the best to guests. It helps keep the libraries in check, ensuring the best services possible are provided and innovation is constant.

New York Public Library Media Relations Director Angela Montefinise sees this sense of competitive collaboration as evidence of librarians’ passion for serving the public and their insatiable need to do more. Montefinese believes that librarians are naturally always on the lookout for new ideas and better ways to help people, so it only makes sense that one system would try and poach a successful program from another system.

Urban Librarians Unite, a New York based advocacy group that campaigns to secure resources for libraries at risk, hosts a conference each year in Brooklyn where librarians from across the country meet-and-mingle. Despite the progressive topics on the conference schedule, like “Pride at the Library - LGBTQ Programming for All Ages”, Zabriskie says there's definitely a sense of competition.

"The trash talk that goes on at the librarian party afterwards is just astonishing, frankly," he says. "But that’s just kind of like professionals having their weird unprofessional times. There’s no ill-will behind it, or anything. We’re a friendly group, but there’s always that tiny bit of edge.”

"The trash talk that goes on at the librarian party afterwards is just astonishing, frankly."

That "tiny bit of edge" paves the way for better library programs across New York. Drag Queen Story Hour is one example of a popular program that the Queens and New York systems adopted following its success in Brooklyn. A concept initially conceived by a few librarians in Park Slope, it has now spread to libraries across the country. Brooklyn Public Library’s Interim Chief Librarian Nick Higgins says sharing their model and best practices at annual conferences has helped other systems implement similar events, to the benefit of the nation’s communities.

“If we are talking about a democratic space, a space that’s fully inclusive, a very rare space that has absolutely no barriers to access our programs and services, having something like Drag Queen Story Hour in public libraries is a tremendous step forward,” he says.

To Higgins, Brooklyn’s identity in the NYC library family is contingent upon its ability to reflect the diversity and idiosyncrasies found in Brooklyn’s neighborhoods. The librarians of the Brooklyn system may implement some funky or techy programs, but as a way to express each neighborhood’s unique character, not to be the artsy younger sister just for the sake of it.

“We give our branch staff the tools and the authority to respond to the diverse needs of our diverse communities, whether that’s expressed in the robotics league that we have that’s more of a tech-focused program, or in our immigrant services program where we offer multi-lingual services for immigrants who come in and want free, quality legal representation in our branches,” Higgins says. “It’s really just being able to respond to the character of the neighborhood.”

"We give our branch staff the tools and the authority to respond to the diverse needs of our diverse communities..."

In his career, Higgins has hopped between both the Brooklyn and New York systems. What stands out to him most about NYPL is its world-renowned research libraries, which provides access to resources like the Gutenberg Bible or the Carl H. Pforzheimer Collection of Shelley and His Circle. Access to these archives is a tremendous gift to the people of New York City, a fitting contribution to the fabric of New York libraries by the older, wiser, elegant institution.

The never-ending quest to serve the city’s people and to improve service results in frequent collaboration between the three systems. Some employees, like Brooklyn Public Library Press Officer Fritzi Bodenheimer, are hesitant to mark that collaboration with any sense of competition, friendly or not.

“Our goal is helping educate, and to be a resource for all New Yorkers,” she says. “If we see a good idea and it would benefit all of our systems, everyone wants to do that. But I wouldn’t call it a playful back and forth.”

But most can agree that having three separate, independent library systems makes each branch stronger, whether that’s a product of a friendly sibling-like rivalry or simple idea sharing among systems with different strengths. Either way, residents benefit.

“I feel like the people of New York City benefit when these three systems are trying to one-up each other, when they’re trying to be the best in the sandbox. I think everybody who is in the city benefits from it,” Zabriskie says. “If one library does it, then all the libraries are going to do it. I’ve always found it a very friendly and engaging way of having diverse ideas and diverse conversation. It is fun to feel like you’ve got one over on them, you know?”

"I feel like the people of New York City benefit when these three systems are trying to one-up each other..."

Some library teams interact more frequently than others. Annual conferences bring large groups together to discuss the most brilliant trends in librarianship. And each spring, the three New York systems come together to tackle the monstrous tack of budgeting. NYPL’s Montefinise says this is one notable time the systems all work closely together to strategize as one, and a single funding campaign often proves more successful than going it alone. The libraries have received record funding from the city this way. In 2016, the New York library systems received $360 million for operating costs, a $33 million improvement from the previous year and the highest increase in recent times.

If these three are so successful operating as one, why don’t they just merge into a single public library? Despite unified success, it seems the staff of each system still prefer to operate with their own unique borough-centric identity.

“The benefits of us still being separate I think it goes back to the identity of the public library systems, quite frankly,” Higgins says. “We have certain things we like to focus on here in the public library in Brooklyn that I would characterize as very neighborhood specific and focused, whereas New York Public Library… they have a different focus, and I think there’s a certain value in having the identities of the libraries remain intact and as independent as we possibly can.”

Montefinise agrees. "When you have three passionate systems all working towards serving the public, it’s better than one," she says.

More like this
We’ve All Had Bad Sex. Nona Willis Aronowitz Is Talking About It.
By Sophia Benoit
10 Must-Read New Books Out This Week
By K.W. Colyard
Jennette McCurdy’s First Kiss On 'iCarly' Didn’t Go As Planned
By Bustle Editors
The First Trailer For Zac Efron’s 'The Greatest Beer Run Ever' Is Action-Packed
By Charlotte Moore and Sam Ramsden
Get Even More From Bustle — Sign Up For The Newsletter