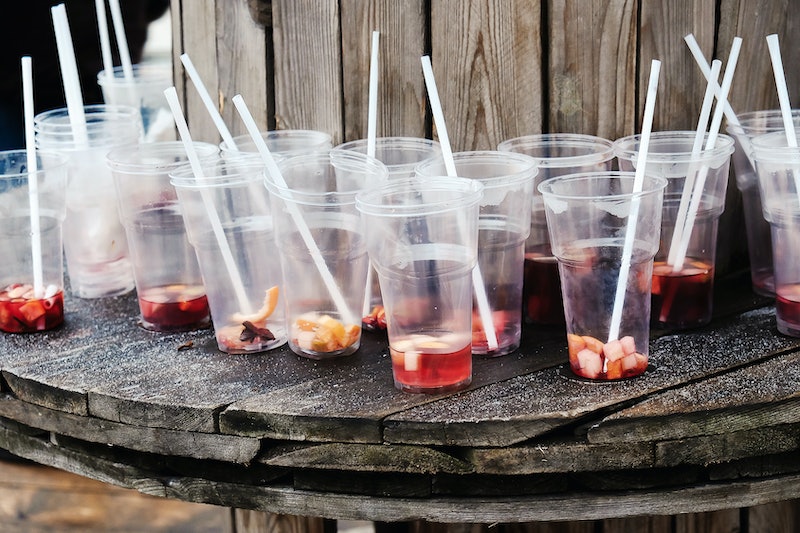 Most of us probably don’t think about how much plastic we use (and throw away) on a daily basis. From plastic grocery bags to take-out silverwares, these small pieces of plastic add up fast, and not in a good way: The impact our plastic waste is having on earth can be super detrimental, and many cities are trying to combat it. Now, New York City might be the next major U.S. city to ban plastic straws, according to the New York Daily News.

The City Council of New York City is set to introduce a bill to ban single use plastic straws, as well as plastic coffee stirrers in restaurants, on May 23. Councilwoman Helen Rosenthal, a co-sponsor of the bill, told the New York Daily News, “After plastic bags and plastic bottles, plastic straws are the next thing that's just taking up space in our oceans. There are other options.” Though 80 public establishments in NYC have already voluntarily pledged to stop using disposable plastic straws via the “Give A Sip” campaign, based out of the New York Aquarium, the new legislation would make getting rid of straws a mandatory requirement.

The reason why? Plastic straws are both ubiquitous, and really difficult to recycle. The organization Lonely Whale explains on their For A Strawless Ocean initiative that “most plastic straws are too lightweight to make it through the mechanical recycling sorter,” so they end up in the trash. In particular, plastic straw waste can wreak havoc on marine life and our oceans. Though tiny, straws are actually among the top ten ranking items found polluting the ocean, according the Ocean Conservancy. Additionally, a 2015 study estimated that 90 percent of seabirds around the world have ingested some type of plastic product, and another study from 2017 found around 700 species of aquatic animals and fish have eaten plastic, too.

As The New York Times reported in March, cities across the U.S., like Malibu, California, and Seattle, Washington, have already moved to ban plastic straws from restaurants, hotels, cafés, and other places where food is served. What’s more, even place across the pond, including the Scottish city of Glasgow, are implementing bans on single use plastic. There's even a campaign to ban straws across all of England. While you might not think much of using a plastic straw, results from cities that have put in place outright bans or campaigns against single use straws have been promising. A recent effort by activists in Salt Lake City prevented six million straws from ending up in landfills.

Though reducing the waste from single-use straws is a smart move for the environment, many disability advocates have pointed out plastic straws are an important and necessary tool for disabled people. While some people have opted to swap plastic straws for reusable options they bring to restaurants, or choose more eco-friendly paper straws, these still aren't necessarily viable options for everyone with a disability. “If you think about it, drinking straws are an accommodation for access no different than ramps, accessible washrooms, and designated parking spaces,” Norman Kunc, a writer, speaker, and disability activist told Vancouver magazine Georgia Straight, in response to the city’s May 16 proposed ban on plastic straws. Though the New York Daily News reported the new bill clarified there would be an exception made for people with disabilities or health issues, proponents have voiced online that it would still require disabled people to disclose their health status in order to receive a straw.

Rather than outright banning plastic straws, some cities and establishments have instead enacted policies where plastic straws aren't given out automatically, which reduces waste while still making sure straws are available to those who may need them.

Though this bill is still in the very beginning stages, it marks an important step in the right direction towards making New York City just a little bit greener. The proposed NYC legislation could be a huge win for environmentalists, our oceans, and Mother Earth.