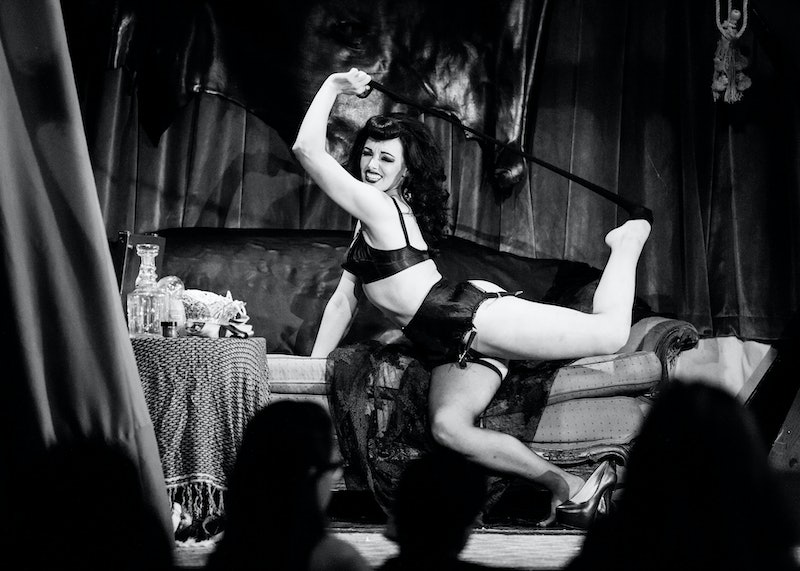 If the word "poetry" makes you think of sleepy high school English classes, dusty lecture halls, or incomprehensible Instagram posts, then you should meet the Poetry Whores of New York City. For an entire decade, the Poetry Brothel has been been giving an immersive, literary spin to the world's oldest profession.

Poetry at the Poetry Brothel is never confined to the page. At least once a month, in New York and several other cities across the country, the Poetry Brothel creates a one-of-a-kind party: a variety show featuring burlesque, booze, live jazz, painters, aerialists, fortune-tellers, and, of course, the Poetry Whores, who provide one-on-one poetry readings in intimate back rooms. January 9th marks their 10-Year Anniversary Extravaganza Spectacular at Brooklyn's House of Yes.

When poets Nicholas Adamski and Stephanie Berger first started the Poetry Brothel, they were hoping to bridge the gap between the stuffy world of academic verse and the seedier, sexier world of late night cabaret.

"We we feeling kind of bored with the poetry scene in New York," Stephanie Berger tells Bustle. "Basically, there was this kind of divide in the poetry world between the academic poetry readings, which are almost forcibly kind of stale and boring—you know, they use halogen lighting and fold up chairs and podiums, and you sit with your hands kind of crossed in your lap."

"We we feeling kind of bored with the poetry scene in New York."

On the other side of the divide, there were the much more freewheeling slam poetry competitions, but, as Berger puts it, “the competition element felt kind of antithetical to our ideas about poetry.”

“The idea was basically just to create a reading series that A), was really really fun and not boring," says Berger, "And B), a reading that could speak to more people than just poets.” After all, if she and Adamski, two career poets, were feeling alienated by the New York poetry scene, how did casual audience members feel?

"We wanted to make something where people who don’t normally go to a poetry reading could have a good time, both at the event itself but also with the actual poetry," says Berger. "And the way that we decided to do that was through the vehicle of the private poetry reading. It’s my personal belief that poetry is just better one on one. It’s easier to access the emotion behind it. You get to form a kind of intimacy." A private reading provides a more visceral, immediate experience then sitting in a classroom or staring at a screen.

Plus, the "brothel" set up means that every poet gets paid for their time. "That was another element that we saw kind of lacking in the poetry scene, the value placed on the poems that we write," says Berger. "It’s really hard for poets to make any money writing poetry. That’s true whether you’re a total entry-level beginner or whether you’re like a super famous poet, who’s won a bunch of awards—those people struggle financially as well.”

An evening at the Poetry Brothel usually opens with a burlesque performance, and various activities to put audience members in the poetic mood. "There are tarot card readings and body paintings available," says Berger, "You can go and get a massage, or have your photo taken or your portrait sketched, or buy some handmade jewelry made by our resident witch."

Then the show begins proper, with Berger as the Madame introducing each of her Poetry Whores. "We give a little PSA about consent," says Berger. "Making sure that all the poets are safe is very important to us."

The poets in questions are reading their own original verse, but each one has created a unique persona for the performance. "Exposing yourself in that way as a poet can be intimidating, so the pseudonyms help with making you feel freer, making you feel outside of yourself," says Berger. "It frees people up to be themselves in a way. We always use this quote by Oscar Wilde, who says that: 'Man is least himself when he talks in his own person. Give him a mask, and he will tell you the truth.'"

After that, the Poetry Whores are available for private readings: "They whisk you away into an intimate backroom, they read to you for like 10 to 15 minutes," says Berger, "Then you’re shot back out into the show and suddenly you’re maybe watching a poet performing onstage, or a fire dancer, or a drag queen doing something crazy and beautiful."

"We always use this quote by Oscar Wilde, who says that: 'Man is least himself when he talks in his own person. Give him a mask, and he will tell you the truth.'"

Every show has a theme and different line up, but the Poetry Brothel always draws inspiration from historical precedent. Brothels have long been home to art that mainstream society considers "vulgar" or "dirty." From the early days of Jazz in New Orleans, to Modernist painters in France, to the first tango dancers in Argentina, brothels and bordellos were a space for free experimentation. "Brothels are a place where, for better or for worse, social mores get thrown out the window," says Berger.

To her, the intimacy and the avant garde nature of a brothel helps people to see poetry through a new lens. For too long, poetry has "felt like it was only accessible to wealthy old white men," says Berger. "And more and more, we’re seeing poets from all kinds of different backgrounds writing and getting popular. We’re trying to be a part of that movement, of making poetry something that is for everybody."

“It’s fun, it’s validating, it’s sort of weird. The Poetry Brothel kind of tries to be what a poem is: it has a little bit of everything in it," she says. "It’s beautiful and intimate and crazy and fun. And going into a private reading with a stranger can be sort of awkward or scary—it kind of includes all of these different emotional and artistic elements that we think vibe well together.”

"Brothels are a place where, for better or for worse, social mores get thrown out the window," says Berger.

It seems that the Poetry Brothel's unique blend of awkward, intimate, and beautiful has paid off over the least ten years. “When we first started it, we were like, building these immersive environments in basements in Bushwick, and doing the show on this total DIY level," says Berger. It’s since become a fully produced, immersive theatre piece, with a dedicated community of poets and poetry fans.

Berger didn't want to give away any surprises for the 10th Anniversary show, but she assures us that “It’s going to be a star-studded Poetry Brothel.”

"It’s fun, it’s validating, it’s sort of weird. The Poetry Brothel kind of tries to be what a poem is: it has a little bit of everything in it," she says. "It’s beautiful and intimate and crazy and fun."

“I’m really hoping that people will walk out of it having this experience of poetry being something that’s really fun and intimate and transformative,” she says. "I love that people are still discovering us after ten years, and I just want to invite more and more people into our community.”