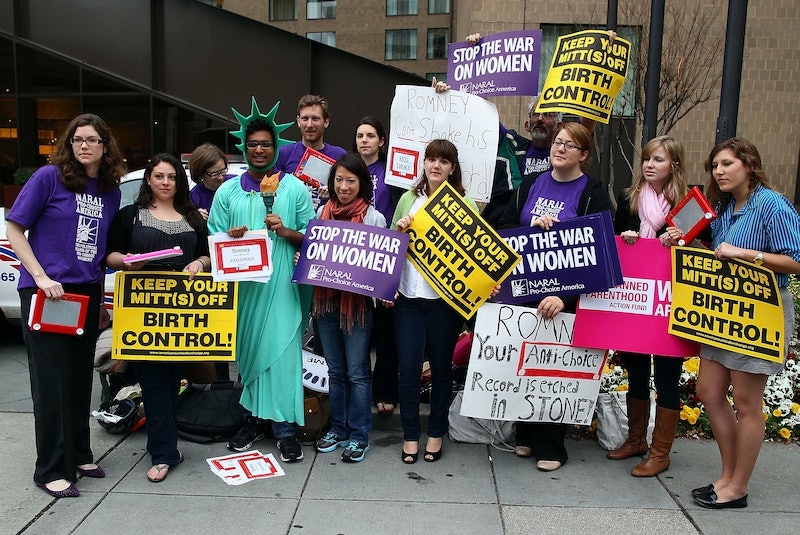 The fight for stronger abortion rights isn't just in the South and Midwest. In fact, activists are pushing to make New York's Reproductive Health Act a reality, since the state legislature has previously failed to get the bill, which would increase abortion access, fully passed. According to the New York Daily News, the National Institute for Reproductive Health Action Fund is launching a $500,000 campaign — including digital, TV, and radio ads and billboards — to convince incoming state senators to support the bill.

The Reproductive Health Act has been passed by the state Assembly before, but the bill always died in the state Senate because of the Independent Democratic Conference (IDC) — a group of Democratic New York senators who caucused with Republicans, thereby giving control of the supposed Democratic state Senate over to Republicans. The Reproductive Health Act was one of the legislative casualties of this political decision.

With the 2018 election, several IDC senators were voted out, per the New York Times. According to the New York Daily News, Democrats will control at least 39 of the 63 Senate seats, making this an opportunity to actually get the Reproductive Health Act through.

"Ensuring that women have access to safe, affordable reproductive health care coverage, and that contraceptive coverage is provided by health insurance companies are common sense policies. The idea that the Senate Republicans are staunchly opposed to protecting women’s rights and ensuring their health care options is not in-line with our New York values and voters," incoming Majority Leader Andrea Stewart-Cousins said in a May press release. "New York women deserve Senate leadership that will stand up for their rights, not hold them back."

In October, New York Gov. Andrew Cuomo said he would sign an abortion rights bill during the new session if Democrats controlled the state senate — and now they do. "We need to pass a law in New York codifying Roe v. Wade, and we are going to pass that law with a Democratic Senate within the first 30 days of this new legislative session," Cuomo said during a Peekskill rally for then-Democratic state Senate candidate Peter Harckham, according to the New York Daily News.

When the National Institute for Reproductive Health campaign was announced, the three-term governor reaffirmed his commitment to such a bill. "I am proud to join with NIRH in continuing to call on the Legislature to finally and immediately pass this critical legislation," Cuomo said, according to the paper. "Together, we will secure reproductive rights in New York and ensure we remain a beacon of progress for the nation."

More like this
Gillian Anderson's New Netflix Drama Is *Nothing* Like 'Sex Education'
By Frances Stewart
Matt Hancock’s TikTok Is The Most Matt Hancock Thing Ever
By Sam Ramsden
Eurovision Has Been Given A Whole New Look Ahead Of Its Liverpool Debut
By Bustle UK
Here’s What Health Means To People In 2023
By Isabella Biedenharn
Get Even More From Bustle — Sign Up For The Newsletter
From hair trends to relationship advice, our daily newsletter has everything you need to sound like a person who’s on TikTok, even if you aren’t.