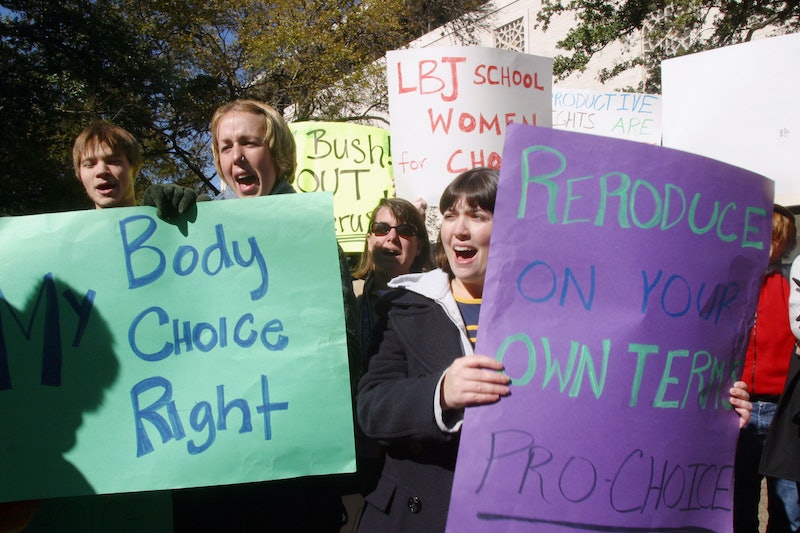 On Tuesday, the 46th anniversary of Roe v. Wade, the New York state legislature approved a piece of abortion rights legislation that was years in the making. Among other changes, New York's Reproductive Health Act protects abortion rights in the state, and some of its proponents believe it could set an example for the rest of the country.

"It really sets a marker, and makes clear that New York state law explicitly and expressly protects reproductive rights, and recognizes that it is a fundamental right for people to be able to make their own reproductive decisions, including to decide to have an abortion," Andrea Miller, president of the National Institute for Reproductive Health, tells Bustle.

Miller explains that up until this bill's success, New York didn't legislate abortion like a health care service. Instead, a 1970 state law which legalized abortion up to 24 weeks — and afterward, if the woman's life was in danger — treated the procedure like an exception to a crime. The RHA would take abortion out of the state's penal code all together, and instead have it governed under the New York's public health law.

Additionally, the bill would allow for abortions after 24 weeks if the woman's health is in danger, or if the fetus is not viable. Access would no longer hinge solely on whether the woman could die if she carried the pregnancy to term.

Miller says that such protections are crucial given the "incredibly hostile Supreme Court we’re facing, the Trump-Pence administration's relentless attacks against reproductive health care, and the fact that at least half of the states are considered hostile to reproductive freedom."

The law has been in the works for nearly a decade, according to multiple reports, and has long passed in New York's house of representatives, where the majority of legislators are Democrats. But until recently, a Republican majority state senate has blocked the bill from moving forward. When Democrats gained control of the senate after last year's midterms, though, that was expected to rapidly change. And it did.

Some critics — and even some supporters — have been quick to point out that the bill, while progressive, is not perfect. Although it will expand access to late term abortions, ensuring that women whose health, not just life, are in danger may legally obtain the procedure, it does not protect women who may electively opt to end their pregnancies after 24 weeks. This may still push some women to travel out of state in the event that they need or want to pursue an abortion that won't be permitted under state law. This was the case in an instance covered in depth several years ago, where a woman traveled all the way to Colorado to receive care.

"A law that governs abortion by examining a woman’s reasons for having one carries an implicit suggestion that there are objectively correct choices in pregnancy, choices that can be ascertained and judged by the body politic," New Yorker writer Jia Tolentino wrote in a piece discussing the legislation, as well as reexamining the Colorado case, earlier this week.

In speaking to Bustle, Miller acknowledges that there is likely still more work to be done. Even so, she believes the law will send a message about abortion access nationally.

"That doesn’t mean our work is done," she says. "We will continue to look for the ways in which our laws would [improve] the ability for people to make these critical fundamental decision in their lives, and to be able to access the care that they need to do so."