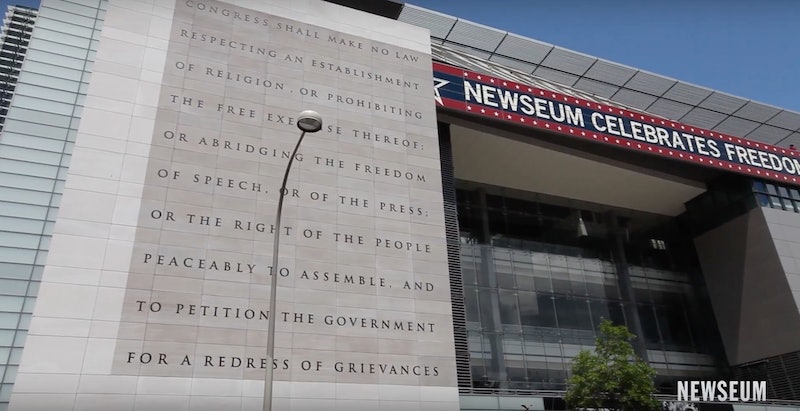 Starting in September, a life-sized statue at Washington D.C.'s Newseum will honor Alice Allison Dunnigan, the first black woman to receive credentials to cover the White House. The bronze statue will be displayed at the Newseum between September 21st and December 16th, USA TODAY reports, at which point it will be relocated to Dunnigan's hometown of Russellville, Kentucky.

A pioneer in American journalism, Dunnigan was inducted into the National Association of Black Journalists' Hall of Fame in 2013. In addition to the White House, she was the first black woman to be credentialed to cover Congress, the State Department, and the Supreme Court, and the first black person to be elected to the Women's National Press Club. Dunnigan spoke openly about the discrimination she faced as a black woman, at one point referring to her gender and race as "twin strikes" against her professional pursuits.

The Newseum is an interactive, journalism-themed museum in the nation's capital that pays tribute to free press and the First Amendment. It previously hosted a tribute to Dunnigan when her autobiography was re-released in 2015.

“Alice was such a barrier breaker for women and people of color, we were happy to have the opportunity to embrace her here at the museum,” Carrie Christoffersen, curator and vice president of exhibits at the Newseum, told The New York Times.

Born in 1906, Dunnigan had a weekly column in a local Owensboro newspaper by the time she was 14. She went on to become a teacher but continued her journalistic pursuits, writing for the Louisville Defender and in other newspapers about local black families and their experiences.

Dunnigan moved to Washington in 1942, initially working as a typist for the U.S. Department of Labor before joining the American Negro Press, a news bureau that provided content for black newspapers around the country. She eventually became that organization's news chief, covering Harry Truman's reelection campaign and the civil rights movement during her 14 years there.

Over the course of her career, Dunnigan was open about the discrimination she faced as both a woman and a black person.

"Race and sex with twin strikes against me. I'm not sure which was the hardest to break down. But I think it was sex," Dunnigan once said. "I hope to live to see an ordinary woman go as far as an ordinary man. A woman has to work twice as hard."

Dunnigan retired from journalism in 1961, when President Kennedy made her the Education Consultant for the Equal Employment Opportunity Committee. She would go on to serve on the Council on Youth Opportunity in both the Johnson and Nixon administrations, and after retiring in 1971, wrote a memoir titled A Black Woman's Experience — From Schoolhouse to White House.

The statue in Dunnigan's honor is being created by Amanda Matthews, a Kentucky-based artist. According to The Times, it's based on a 1947 photograph of Dunnigan holding a newspaper in front of the U.S. Capitol.

Dunnigan's pioneering role in journalism is still highly relevant: A recent survey by the American Society of News Editors found that black women make up only 2.62 percent of journalists at newspapers and online news sites.