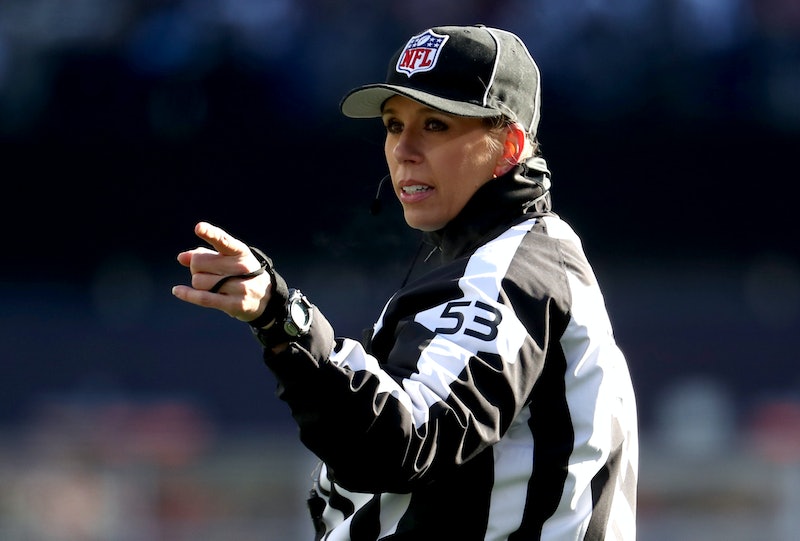 At Sunday's American Football Conference (AFC) divisional playoff game, NFL referee Sarah Thomas made history yet again, becoming the first-ever woman to serve as an on-field official during an NFL playoff game. In 2015, Thomas became the football league's first-ever full-time female official — and she has definitely made her mark ever since.

Thomas officiated Sunday's playoff game between the New England Patriots and the Los Angeles Chargers, which the Patriots won 41 - 28. CNN reported that Thomas served as the down judge as part of referee Ron Torbert's crew. Notably, in addition to Thomas, another woman also made history on Sunday. Terri Valenti served as the game's replay official, marking the first time a woman has ever worked in that capacity during a playoff game as well, the Philadelphia Inquirer reported.

Thomas has had an impressive track record of "firsts" throughout her career. As Bustle reported back in 2015, she started officiating college football games in Conference USA in 2007 — and was the only woman doing so at the time. In 2009, she officiated the (now non-existent) Little Caesars Pizza Bowl between Marshall University and Ohio University, becoming the first woman to ever officiate a college bowl game, Bustle noted.

As the Philadelphia Inquirer described, Thomas subsequently became the first woman to officiate a major college football game after working a Memphis-Jacksonville State game in 2015. She then headed to the NFL that same year to become its aforementioned first-ever full-time female official.

Back in 2015, Thomas described the surprise and excitement she experienced when she discovered she would be working for the NFL. "You never expect it but when it comes, you definitely answer the call but I was just about speechless," Thomas told CBS.

Thomas also explained to CBS in that same interview why she prefers to tuck her hair under her hat when she's officiating football games. "To truly blend in," Thomas noted to the television network. "If I have a ponytail, you know, then I separate myself immediately. So tucking my hair, I blend in and I'm just another official."

Several years later, in February 2017, Thomas reflected on her career thus far during an interview with Bustle. During this interview, she noted that more and more women are pursuing careers as football officials. Thomas asserted to Bustle that it's "quite a view" to go to training camps for officials and see more female faces in the crowd.

At the time, Thomas also offered some advice for those who face pushback in their career pursuits, whether it's because of their gender or something else. "You have to forget about the naysayers. Don't let your inner critic hold you back," she told Bustle.

Thomas has certainly broken many barriers throughout her career — and she told CNN in 2015 that she was honored to be considered a "trailblazer." She also emphasized that much of her success comes from her passion for the sport and the job, saying to the network that she was focused on "being the best official I can be." Thomas also added, "I've just been doing this truly because I love it. The guys don't think of me as a female, they see me as just another official."