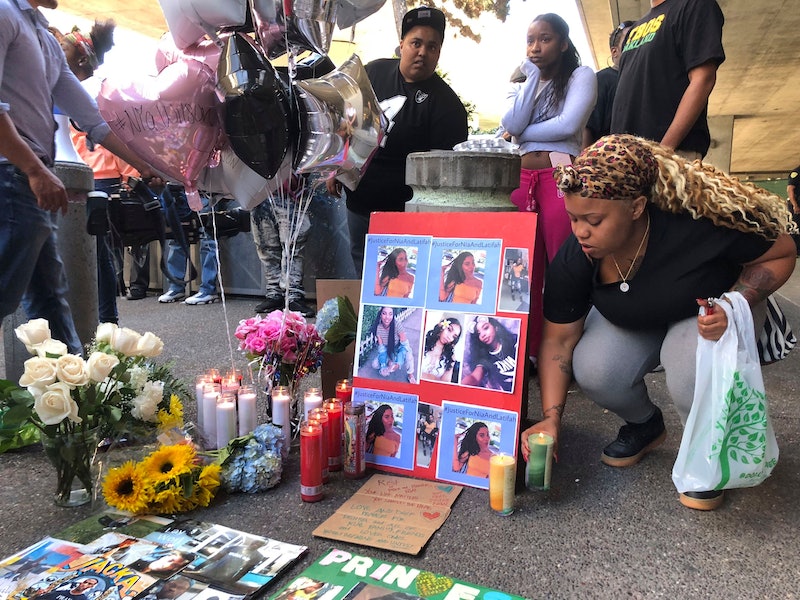 America's painful history of race relations has again come to the forefront after a murder on a Bay Area Rapid Transit (BART) station platform. While officials emphasize that there's no evidence at this point to declare the murder a hate crime, black teenager Nia Wilson's death has sparked calls of "say her name" across Twitter and elsewhere.

The Bay Area's ABC 7 News reported Monday that the killer had been caught on a different train, almost a full day after he stabbed sisters Nia and Letifah Wilson at the MacArthur Station platform on Sunday. Nia, who was 18, lost her life, and Letifah is currently recovering from her injury.

“It was, in my close to 30 years of police experience, probably one of the most vicious attacks that I’ve seen,” BART Police Chief Carlos Rojas said at a Monday press conference. The Washington Post reported, though, that officials have not yet been able to divine a motive behind the attack.

“Up to this point, we do not have any information that suggests it is race motivated, but we cannot discount it at this time,” Rojas said in the press conference. "We haven't connected him to any type of radical group or white supremacist group or anything like that."

This, however, has not stopped people from making that connection. In a statement on the attack, Oakland Mayor Libby Schaaf noted the "tragic and deeply racist history" of the United States that the attack brought to many peoples' minds:

Although investigators currently have no evidence to conclude that this tragedy was racially motivated or that the suspect was affiliated with any hate groups, the fact that his victims were both young African American women stirs deep pain and palpable fear in all of us who acknowledge the reality that our country still suffers from a tragic and deeply racist history.

This fear is likely what led to the "Say her name" calls on Twitter. The #SayHerName movement started in 2015, according to the Huffington Post, as a response to the death of Sandra Bland, a black woman who was in police custody at the time of her death. According to TruthOut, #SayHerName brings attention to police brutality against black women.

Nia Wilson's death, of course, came at the hands of a felon released on parole rather than a police officer. The sheer brutality of it, however, and the fact that the murderer wasn't apprehended immediately, brought #NiaWilson alongside #SayHerName.

As Oakland officials continue to investigate the crime, those close to Nia have made public appeals for people in Oakland to stay calm.

No matter what the motive for the crime turns out to be, there's no doubt that it has instilled fear not only in the Bay Area, but also in black women following the story across the country.

"My heart breaks for #NiaWilson. And for every black woman and femme that walks home feeling the danger from all sides," wrote one Twitter user. "This fear we carry is literally building up in our bodies, killing us like a poison if we don’t first face punishment for simply being alive."