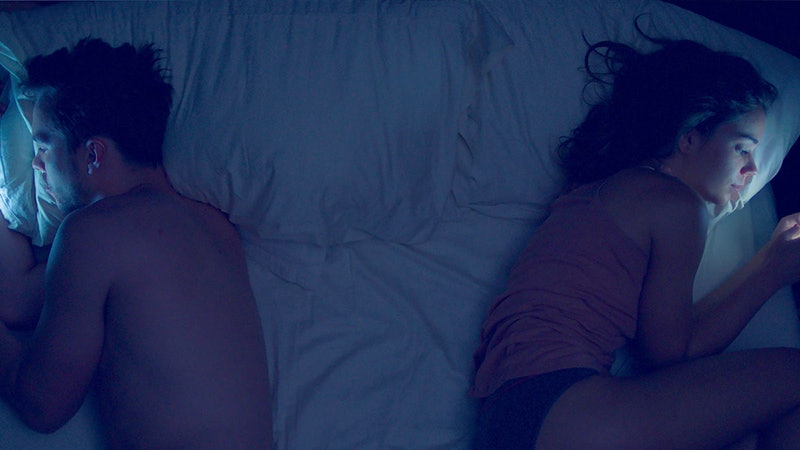 While traditional means of finding a mate are still in effect, Tinder, Bumble, Hinge, and other dating apps have never been more popular. When a potential partner or one night stand is only a swipe away, why exert any additional effort? This is one of the themes explored in Drake Doremus' Newness, a film that premiered at Sundance Film Festival and follows two 20-somethings who find lust and maybe even love on a dating app. But according to the filmmaker and the film's stars, Nicholas Hoult and Laia Costa, dating apps aren't always for the better.

"Technology is essentially changing the DNA of the next generation," Doremus says, nestled between the actors on a modernist couch at Sundance Film Festival. "They grow up on iPads, swiping at 19 and 20 years old, getting this dopamine hit, this idea that somebody can be this new, exciting thing. And as soon as the smallest hint of an issue rises in any relationship, you can just swipe and get out of that and move on."

According to the Pew Research Center, one in five 18 to 24-year-olds use mobile dating apps — a more than fourfold increase from those of the same age who used the app in 2013. The same study says that of those who use dating apps: "61% agree that online dating is easier and more efficient than other ways of meeting people."

And it does sound convenient — there are millions of men and women in the world, so why not date as many as it takes to find someone compatible, all with the flick of a swipe or two? But Doremus fights against this mindset, saying this mentality can ruin connections. "It's an idea that relationships are disposable and anything with meaning and depth is scary because it requires being vulnerable. [When] you're swiping, you can feel safe."

The film's millennial stars agree. "[My character] really struggles with this feeling of getting bored after a while. I can feel my grandparents not talking about desiring other people, for example. And nowadays, young people are braver in that sense," Costa says.

Hoult, who plays a swipe-happy pharmacist with a tragic past, says millennials have less to work for in terms of relationships. "Now, the second you want something, you pretty much get it," he says. "It means you don’t have to work for things. It’s built into the culture in terms of people seeing people getting famous on reality shows. You think, 'Alright, this is how you become famous quickly..."

But instant fame, instant pleasure, instant access to another human being in an often sexual way — can be damaging. A study from the American Psychological Association reports that those who used the dating app Tinder, reported "lower levels of self-worth, being less satisfied with their faces and looks, and were more ashamed of their bodies." Ouch.

"The things that make relationships good are work, time, and people working with each other and people investing in each other," Hoult argues. "And people aren't willing to put the work into anything now. You’re used to the rewards without putting in the effort. It sounds like I’m bashing Millennials, but I’m not because I’m one of them..."

Doremus stresses that it's not entirely negative. He even argues that Newness is a neutral film, taking no particular stance on dating apps whatsoever. "The film just says that this is an experience and this is what it feels like," the 33-year-old filmmaker says. "For anyone who has used a dating app, whatever you want to get out of it — whatever your goal is — it’s OK."

"What works for you, it might not work for me," Costa says.

"Now you’re seeing dating apps that are so specific to what you’re into and what you’re looking for, and it’s going to become more curated as technology develops. I mean, if you want to hook up with Nicholas Holt, there’s an app and you can hook up with Nicholas Holt. It won’t actually be him, but it will be some kind of… wax figurine situation," he jokes, while Holt shakes his head disapprovingly.

In the eyes of the Newness cast and creator, dating apps pose several problems, a few advantages, and plenty of fodder for film. They may be occasionally damaging, but there's no stopping them. So in the spirit of embracing the inevitable, I have a final question: Where's that Nicholas Hoult dating app, anyway?