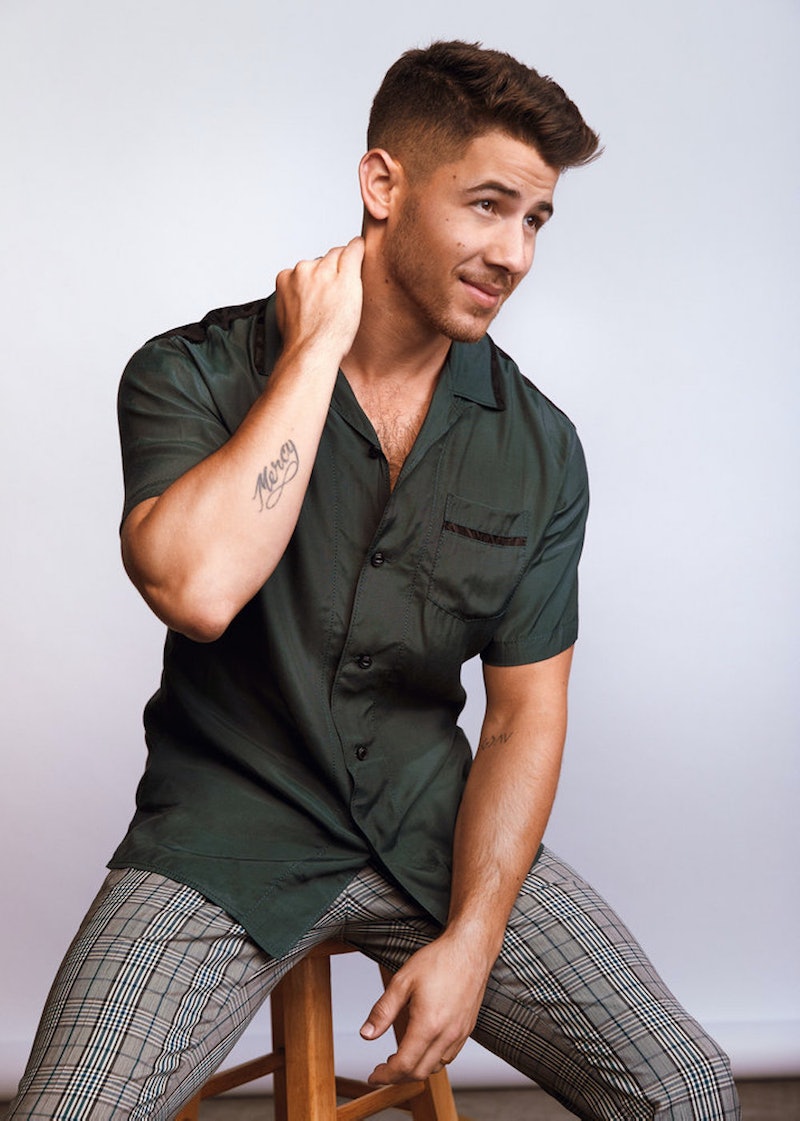 As if releasing a new album with his brothers and embarking on a world tour wasn't enough, Nick Jonas is joining The Voice as a coach when the show returns for Season 18. The singer announced the news on Monday, Oct. 7, during a pre-taped Jonas Brothers appearance on The Ellen DeGeneres Show, set to air Tuesday. And now that the news is out, it seems like he may already have a feud brewing with fellow coach Blake Shelton.

Following his chat with Ellen DeGeneres, Jonas shared the news with his Instagram followers on Monday night, posting an official promotional photo. In a separate post, he shared a video message with fans, explaining how happy he was for his coming reality show adventure. "Well, the big news is finally out — I am so excited," he said. "Season 18 of The Voice. To be joining that crew of amazing coaches, Kelly Clarkson, John Legend, Blake Shelton. While I'm excited to work with you guys, I'm coming for you."

He went on to say that he's hoping for a win for Team Nick, and that he's looking forward to working with "some amazing talent" on the show before thanking NBC for making it happen.

This isn't Jonas' first partnership with the network. Earlier this year, the Jonas Brothers appeared on Songland, a reality competition for songwriters, and they ended up recording Able Heart's "Greenlight" as part of the show. This also isn't the first time a member of his family has appeared on the show; older brother Joe Jonas was actually a coach on the Australian version of The Voice last year. And, Jonas himself acted as an advisor for Christina Aguilera's Season 8 team.

Jonas will be taking over Gwen Stefani's chair on the show. According to Entertainment Tonight, Stefani is leaving the show to finish up her Las Vegas residency, Just A Girl, at Planet Hollywood, leaving an empty chair for the taking. But before Jonas even had the chance to sit in a coveted Voice seat, Shelton, the only coach who as appeared in every season, made it clear that there's no way Team Nick is going to beat Team Blake. When Jonas shared the news with DeGeneres, the host shared a video of messages from his new coworkers, including Shelton.

"I'm going to have to look through the rules, because this is my TV show," Shelton said in the clip. "I'm not even sure if you're old enough to be a coach on The Voice, but I'm certain that you're going to get your butt kicked, buddy."

Fortunately, Clarkson and Legend were a bit more welcoming — although both of them suggested that Jonas form an alliance with them to defeat Shelton for once and for all.

After years of performing with his brothers as well as solo, it seems that Jonas is well prepared to help shape aspiring singers on The Voice. Shelton should watch out — there's a good chance Jonas will give him a run for his money.

More like this
Tristan Thompson Plays Drake’s Best Man In A Music Video Wedding With 23 Brides
By Grace Wehniainen
What Is Ariana Grande's Net Worth? When It Comes To Money, She Has No “Problem”
By Hugh McIntyre
Pete Davidson Pops Up In This Hidden Scene From The Kardashians Season Finale
By Jake Viswanath
RHOA’s Kenya Moore Said Her Friendship With Marlo Hampton Is “Too Far Gone”
By Brad Witter
Get Even More From Bustle — Sign Up For The Newsletter